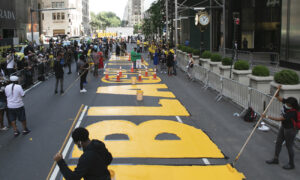 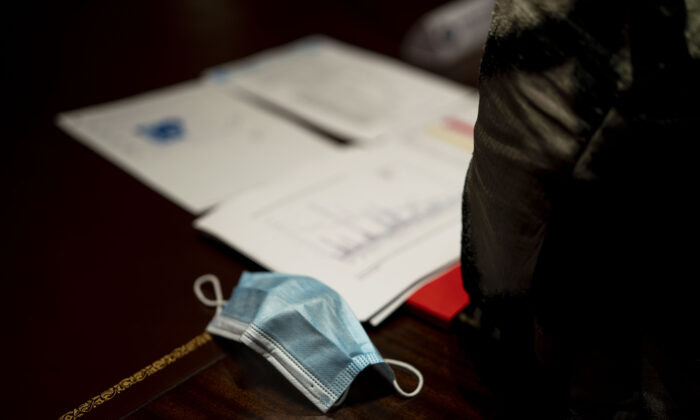 A mask is placed on the table during a meeting between U.S. President Donald Trump, Arkansas Gov. Asa Hutchinson, and Kansas Gov. Laura Kelly in the Cabinet Room of the White House in Washington on May 20, 2020. (Doug Mills-Pool/Getty Images)
Crime and Incidents

A retired firefighter was arrested for allegedly threatening to kidnap the mayor of Wichita, Kansas, police said on Friday.

Meredith Dowty, 59, was arrested Friday on a charge of criminal threat after officials were “alerted to threatening statements directed toward city of Wichita Mayor Brandon Whipple,” according to a news release from the Wichita Police Department (pdf).

A Sedgwick County Sheriff’s Office booking record suggests that Dowty was booked into the county’s adult detention center on Friday afternoon, with bail set at $50,000.

“He said he was going to kidnap me and slash my throat and he needed my address because I needed to see the hangman—me and everyone who, something about tyranny,” said Whipple, a Democrat. “It sounded like the person was very upset about pretty much mask mandates and he said something about not being able to see his mother because of COVID restrictions on elderly homes.”

The citywide mask ordinance, first enacted on July 3, requires Wichita residents to wear mask indoors in most cases, or outdoors where 6 feet of social distancing is not possible, with some exemptions including children 5 years old or under, those with medical or mental health conditions, and customers eating at restaurants. Individuals and businesses found not in compliance with the ordinance will be fined. A first notice is $25, a second notice is $50, and three or more notices will result in a $100 fine.

On Sept. 9, Wichita City Council voted to extend the mask ordinance to Oct. 21. During a 9-hour council meeting, over 120 Wichita residents spoke in opposition of the ordinance’s extension. Some argued that individuals should be allowed to make their own decision about whether to wear a mask. Some pointed out that the ordinance was preventing a full recovery of local businesses. Others questioned whether it was scientifically-supported that wearing a mask could actually slow the spread of the CCP (Chinese Communist Party) virus.

Earlier this month, members of two militia groups were arrested in an alleged plot to abduct Michigan Gov. Gretchen Whitmer because of restrictive measures on personal movement and the economy amid the pandemic. At least 14 individuals involved in the plot have been charged. A criminal complaint against the alleged conspirators suggested that they talked about kidnapping the Democratic governor and trying her for “treason,” before having her executed.