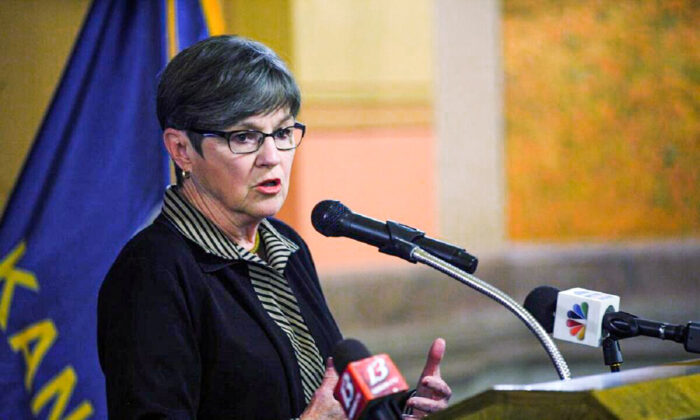 Kansas Democratic Gov. Laura Kelly, who is seeking a second term in November, speaks during at the Kansas Statehouse in Topeka on April 21, 2021. (John Hanna/AP Photo)
Politics

The Kansas primaries on Aug. 2 will include Democratic and Republican inter-party preliminaries to select their gubernatorial candidates for fall’s general elections.

Both face nominal opponents in slam-dunk Aug. 2 primaries, have millions to spend and are already lobbing broadsides at each other in long-plotted campaigns that will only intensify as November nears.

The anticipated Kelly-Schmidt race is one of 36 gubernatorial elections nationwide this fall. Kelly is among 22 Democratic governors seeking re-election but the only one doing so in a state that former president Donald Trump won in 2020, garnering 56 percent of the vote.

In addition to the governor, Kansans will also vote in primaries for lieutenant governor, attorney general, secretary of state, treasurer, insurance commissioner, in one GOP congressional district, and for five seats on the State Board of Education.

The inter-party contests seeking November nods are, however, sideshows on the Kansas Aug. 2 ballot, which is dominated by the proposed “Value Them Both” amendment.

If the ballot measure is approved in a vote being watched closely nationwide—the first such referendum of the “post-Roe era”—the Kansas Constitution would no longer guarantee access to abortion as a right.

Early voting in the primaries and on the “Value Them Both” amendment began July 13 and concludes Aug. 1. The polls are open 7 a.m. to 7 p.m. on Election Day, Aug. 2.

In Kansas’ “semi-open” primary system, unaffiliated voters can participate in the partisan primary of their choice on Election Day, but they must re-register in that party to do it.

These unaffiliated voters could significantly influence outcomes in November’s general elections, including in the anticipated Kelly-Schmidt governor’s race, rated a “toss-up” election by the Cook Political Report, Inside Elections with Nathan Gonzales, and Larry Sabato’s Crystal Ball.

According to the Kansas Secretary of State’s Election Division (KED), as of June 2022, unaffiliated voters are the second largest bloc of Sunflower State voters.

As of June, there were 851,000 ballot-qualified Republicans, about 44 percent of the state’s registered voters, and 496,000 registered Democrats, according to KED.

With her party only constituting a quarter of the state’s voters, Kelly’s campaign has focused on her appeal to independents and disaffected Republicans, running as an efficient, bipartisan administrator and moderate, pragmatic leader.

Kelly served 14 years in the state Senate, including as assistant minority leader and as minority whip, after a 16-year stint as Kansas Recreation and Park Association executive director.

Kelly and incumbent Lt. Gov. David Toland, who also serves as Kansas secretary of commerce, are being challenged in the Democratic primary by Richard Karnowski and his Lt. Gov. hopeful, Barry Franco.

Karnowski, of Seneca, describes himself as a former Republican who is now an “anti-abortion Democrat.” He is not expected to draw many votes on Aug. 2.

Kelly touts bipartisan achievements in campaign literature, claiming she “has brought together both parties to get things done for Kansas … brought jobs, businesses, opportunities, and record economic success” as she “balanced the budget, fully funded schools, and is fighting for tax cuts …”

The incumbent Democrat notes she has “fulfilled her promise to be a moderate leader who would put Kansas back on track after years of fiscal mismanagement, harmful budget deficits, and underfunded schools.”

Since assuming office in 2018, Kelly’s campaign states “Kansas has seen a record of over $8.6 billion dollars of investment in new business initiatives and the creation and retention of over 41,000 jobs.”

Under her leadership, more than 425 new infrastructure projects have been planned or initiated, “including fixing roads, rebuilding bridges, and expanding efficient and reliable internet access to rural communities.”

Schmidt served in the Kansas Senate from 2001 to 2011 where he chaired the chamber’s agriculture committee and was Senate majority leader.

That’s less than half the $1.5 million Kelly raised, but yet, Schmidt noted in a recent statement, his campaign enters the three months to November with more money in its coffers.

In fact, according to Schmidt’s campaign, the $1.505 million he has in his kitty is a new record for “the most cash-on-hand for any non-incumbent gubernatorial candidate in the state, as well as the most money raised by any non-incumbent.”

“Kansans are disappointed with Gov. Kelly’s failures and are excited about Derek’s positive vision for our state, and that’s reflected in today’s report,” Schmidt campaign manager CJ Grover said in a statement.

The Schmidt-Sawyer ticket is challenged on the Aug. 2 GOP gubernatorial ballot by Arlyn Briggs, a Kincaid farmer and trucker, and his Lt. Gov. running mate, Lance Berland, of Abilene.

Their campaign reports raising $50—in 2021—and Briggs was arrested three times in June on various charges related to him making an alleged criminal threat against a law enforcement officer. It is doubtful Briggs will present much of a contest to Schmidt on Aug. 2.

In touting his record as state attorney general, Schmidt says he has led Kansas’ “fight against human trafficking, toughened penalties for stealing taxpayer money, made fighting elder abuse and exploitation a priority, and built a long-overdue modern forensic science laboratory for the Kansas Bureau of Investigation.”

During his three terms as attorney general, Schmidt has “personally and successfully argued three Kansas cases before the U.S. Supreme Court and “defended President Trump’s America First policies that grew jobs, promoted freedom and made our economy strong.”

If elected, he will “bring common sense and conservative leadership back to Kansas” with a focus on “building a climate of opportunity for all Kansans and protecting traditional values like religious freedom, the rule of law, life, freedom to speak openly, and the Second Amendment.”

Among Schmidt’s proposals is his Retire Tax Free initiative, which calls for the elimination of state tax on benefits and income from Social Security, IRAs, annuities and other retirement vehicles to stymie a population exodus from Kansas.

“To every retiree considering leaving Kansas after a lifetime of working and living here, we want you to stay,” Schmidt said. “To every retiree in another state looking to move, come to Kansas. We’re going to give you another reason to remain or return to Kansas by helping you retire tax free.”

The proposal has drawn criticism from the Kansas Democratic Party, which says it is Schmidt’s ploy to distract voters from his association with former GOP Gov. Sam Brownback’s 2012 tax cut “experiment” that lawmakers repealed in 2017 after causing massive budgetary disruptions.

Schmidt maintains he is not Brownback, but he is an America First conservative who can serve deep red Kansas voters better than a Democrat who claims to be a moderate but is hardly such.

“She vetoed 20 tax cuts, funding for mental health, the Parents Bill of Rights and the Fairness in Women’s Sports Act,” Schmidt said in a statement.

“Laura Kelly is so out of touch, she called efforts to secure America’s southern border ‘political games’ and said of the coming Biden recession, ‘Bring it on.’”