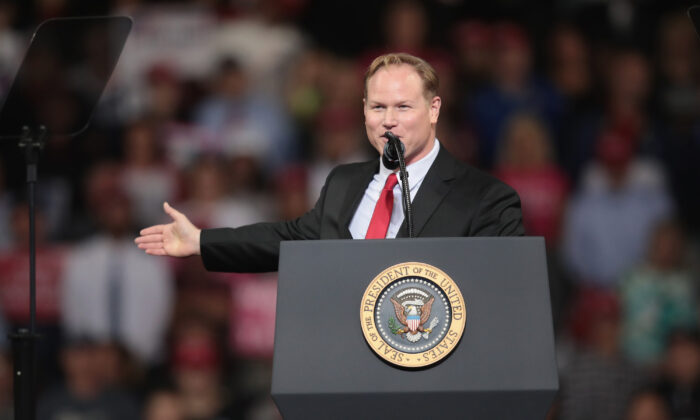 Republican candidate for the U.S. House in Kansas's 2nd District Steve Watkins speaks at a rally with President Donald Trump at the Kansas Expocenter in Topeka, Kansas on Oct. 6, 2018. (Scott Olson/Getty Images)
2020 Election

Freshman Rep. Steve Watkins (R-Kan.) lost the GOP primary in the state’s 2nd Congressional District on Aug. 4, weeks after he was charged with three felonies and a misdemeanor linked to a probe into whether he voted illegally in a municipal election last year.

Watkins was unseated by State Treasurer Jake LaTurner on Tuesday, putting an end to his bid for a second term. Watkins was first elected in November 2018, replacing Lynn Jenkins (R-Kan.) following the end of her term. At the time, he received 47.6 percent of the vote against opponent Paul Davis’s (D-Kan.) 46.8 percent—a margin of 2,239 votes.

“It’s time to look to the future,” LaTurner told his supporters at a Topeka hotel. “It’s time to unite this party.”

Watkins told reporters he called LaTurner to congratulate him and to wish him well in November, adding he personally would like to be part of Republican unity this November.

“I will continue to work to the best of my ability ’til the very last day that I serve,” Watkins said.

Kagay filed multiple felony counts against Watkins, which stem from a ballot he allegedly cast in the Topeka City Council election in November 2019. The charges include interference with law enforcement; providing false information; voting without being qualified; and unlawful advance voting. Watkins also was charged with a misdemeanor for failing to inform the Department of Motor Vehicles about a change of address.

For the local election last year, Watkins in August used the address of a Topeka UPS store on his voter registration, before signing an application for a mail-in ballot in October. He also allegedly voted in the wrong city council district.

At the time, Watkins’s office said he had made an error and filled in his campaign’s mailing address instead of his home address.

In December 2019, he changed the address to an apartment complex in the city, about 2 miles north of the UPS store, but it was the address for the complex’s office. That address was not in the same city council district as the UPS store but in a district with no council race last year.

In January, Watkins filed another form listing another address for an apartment in the same complex as his residence.

“I haven’t done anything wrong,” Watkins said at the start of the July 14 debate. “As soon as I realized that I had put my mailing address instead of my physical address, we fixed it.”

The most serious criminal charge accuses Watkins of voting in the 2019 local city and school board election without being qualified. A first-time offender who’s convicted could face a year in prison, though the more typical sentence would be 2 years’ probation.

Kagay also charged Watkins with voting illegally in advance and interfering with law enforcement by providing false information. Both felonies could bring up to 7 months in prison, though a year’s probation is the presumed sentence.

Kagay’s announcement didn’t provide details about the alleged crimes, and the district attorney said in an email that he couldn’t discuss them “until they are presented in open court.”

Watkins last month dismissed the charges as “clearly hyper-political” and the timing as “suspicious.” A spokesman for his reelection campaign, meanwhile, released a statement on July 14 denouncing the charges.

“Just like President Trump, Steve is being politically prosecuted by his opponents who can’t accept the results of the last election,” the statement said.

LaTurner told reporters Tuesday that voters want somebody who is consistent representing them.

“They want to keep this seat in Republican hands and I think they spoke with a loud voice saying that tonight,” LaTurner said. “We are very pleased with the results and look forward to uniting the party.”