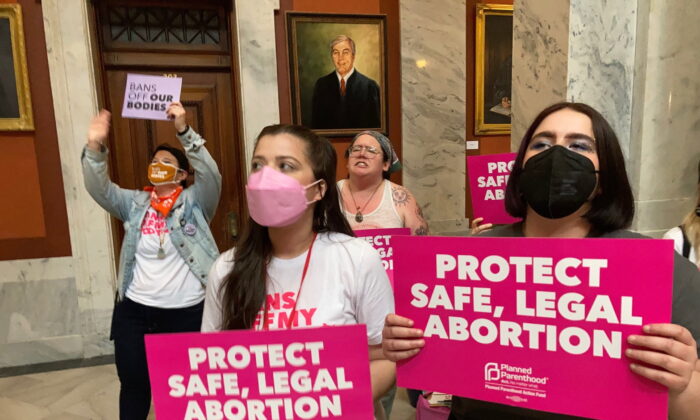 Pro-abortion advocates in the Kentucky Capitol in Frankfort, Ky., demonstrate in April against a bill adopted by lawmakers to place on November’s ballot a proposed amendment that declares there is no right to abortion in the state’s constitution. (Bruce Schreiner/AP Photo)
2022 Midterm Elections

Kansas’s Aug. 2 ‘Value Them Both’ Vote First of at Least 6 Abortion Measures on 2022 Ballots

Kansas’s “Value Them Both” amendment goes before Sunflower State voters as a special election on their Aug. 2 primary ballots.

The measure asks voters to remove access to abortion as a right guaranteed under the Kansas Constitution in a 2019 state Supreme Court ruling.

It’s the nation’s first public referendum on abortion since the U.S. Supreme Court overturned its 1973 Roe vs. Wade ruling in a 6–3 June 24 decision and kicked abortion regulation back to the states.

As such, the Kansas “Value Them Both” special election is being intensely watched nationwide; pro and con campaigns have collectively spent more than $13 million, polls are knotted, and election officials predict record turnouts for a midterm primary.

Voters in at least five other states, maybe six, will also see abortion-related ballot measures in 2022, but not until November’s general elections. The six, or perhaps seven, 2022 statewide referendums are the most relating to abortion for a single year in the nation’s history, according to Ballotpedia.

California, Vermont, and Michigan voters will cast ballots this fall on proposed constitutional amendments that would enshrine access to abortion as a right.

As in Kansas on Aug. 2, Montana and Kentucky voters will be presented in November with proposals that curb access to abortion. Sponsors of a proposed restrictive abortion measure in Colorado have until Aug. 8 to garner the needed signatures to qualify.

Several abortion-related measures will be on November ballots.

California Proposition 1: The proposed “Right to Reproductive Freedom Amendment” was placed on the Nov. 8 ballot by two-thirds votes of both chambers of the state Legislature.

The amendment states that the state can’t “deny or interfere with an individual’s reproductive freedom in their most intimate decisions,” including decisions to have an abortion or to choose or refuse contraceptives.

Vermont Proposal 5: The proposed “Right to Personal Reproductive Autonomy Amendment” was placed on the ballot by state lawmakers.

If adopted, the Vermont Constitution would state that “an individual’s right to personal reproductive autonomy is central to the liberty and dignity to determine one’s own life course.

Michigan “Right to Reproductive Freedom” initiative: The prospective amendment establishes a state constitutional right to reproductive freedom, defined as “the right to make and effectuate decisions about all matters relating to pregnancy, including but not limited to prenatal care, childbirth, postpartum care, contraception, sterilization, abortion care, miscarriage management, and infertility care.”

Sponsored by Reproductive Freedom for All, a coalition that includes the American Civil Liberties Union (ACLU) and Planned Parenthood, the proposed amendment was cleared for signature gathering in March and needed 425,059 signatures by July 11.

Sponsors submitted 753,759 signatures, nearly double the required number, before the deadline, guaranteeing the measure will be on November’s ballot.

The national ACLU and the ACLU of Michigan are among the Reproductive Freedom for All PAC’s top donors. The campaign has received nearly $2 million in donations, according to the Michigan Secretary of State Office.

Citizens to Support MI Women & Children is coordinating opposition to the proposed amendment. By mid-July, it only had about $110,000 in funding, but its campaign was gearing up to challenge “Reproductive Freedom For All.”

Montana LR 131: Another legislatively referred measure placed on the ballot by lawmakers, the proposal asks voters to install in state law a declaration that infants born alive at any stage of development are legal persons.

The proposed “Medical Care Requirements for Born-Alive Infants” measure requires medical care to be provided to infants born alive after an induced labor, cesarean section, attempted abortion, or other procedure.

LR 131 states that “infants born alive at any stage of development are legal persons” and requires “medical care to be provided to infants born alive after an induced labor, cesarean section, attempted abortion, or another method.”

Kentucky Amendment 2: As in Kansas on Aug. 2, Kentucky voters on Nov. 8 will cast ballots on a proposed amendment that states that the state’s constitution can’t be interpreted to establish a state constitutional right to abortion.

The Kansas and Kentucky ballot measures are similar “no right to abortion” proposals that seek to repeal existing state court rulings regarding the procedure, clarifying that state lawmakers, not the courts, are the only ones who can craft abortion-related laws.

Voters in four other states have approved ballot measures that declare that there’s “no right to abortion” in their state constitutions.

There are proposed “no right to abortion in the state constitution” amendments vying for ballots in Pennsylvania in a 2023 ballot and in Iowa in 2024.

In Colorado, where the state’s Democratic majority passed a “Reproductive Health Equity Act” during its 2022 session that enshrines abortion access, the Equal Protection of Children coalition is attempting to get its ‘‘Unlawful Murder of a Child” measure before voters on November’s ballot.

The proposed amendment—Initiative No. 56—was cleared for signature gathering in April and needs 124,632 valid signatures by Aug. 8 to qualify for the ballot. In late June, sponsors reported that they were “three-quarters” of the way toward meeting that signature threshold.

If approved, the proposal would make it illegal under state law to “murder a child … at any time prior to, during, or after birth” with exceptions for acts with the intent or attempt to save the life or preserve the health of both mother and living child, the fetus isn’t viable, or the pregnancy is ectopic.

The proposed Colorado statute would define murder as “using or prescribing any instrument, medicine, drug, or any other substance, device, or means, and causing death.”

While abortion rights and pro-life advocates in these seven states have managed to get their proposals on ballots as public referendums—with assists from state lawmakers in several cases—more than a dozen legislatures have independently taken legislative actions regarding abortion during their 2022 sessions.

In anticipation of the U.S. Supreme Court’s ruling in Dobbs v. Jackson Women’s Health Organization—few were surprised when it upheld a Mississippi law that bans abortion after 15 weeks of pregnancy—state lawmakers across the country adopted measures that would go into effect should the decision return abortion regulation completely back to the states.

Lawmakers in 13 states, including Texas, Utah, and Wyoming, have over the past decade—and especially in the past two years—adopted “trigger laws” that automatically make abortion illegal if Roe was overturned.