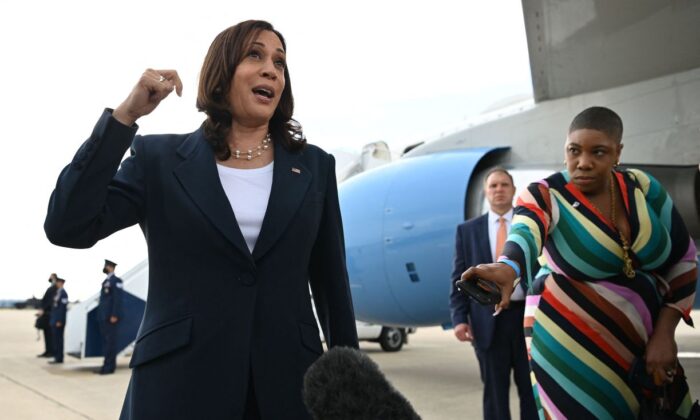 Symone Sanders, the chief spokeswoman for Vice President Kamala Harris, has resigned from her position, according to Harris and White House press secretary Jen Psaki.

“I love Symone,” Harris told reporters outside Air Force Two on Thursday, confirming her departure. “I can’t wait to see what she will do next. I know that it’s been three years jumping on and off planes going around the country … and I mean that sincerely,” she continued.

During questioning, Harris declined to answer follow-up questions about whether she views Sanders’ departure as a broader staff shakeup in her office.

On Wednesday, Sanders sent a letter to her colleagues saying she would leave the White House at the end of the year.

“Shortly, Politico, CNN, and lord know whoever else is going to report that I am leaving the office at the end of December. It’s true and I’m sorry you all found out like this,” her letter stated.

“I’m so grateful to the VP for her vote of confidence from the very beginning … I am immensely grateful and will miss working for her and with all of you,” Sanders added. “We are fighters. Our President and VP are fighters and I will continue to be on the team, fighting for them.”

And Thursday, Psaki confirmed reports that Sanders would resign due to a “grueling and exhausting” several months.

“It’s natural for staffers who have thrown their heart and soul into a job to be ready to move on to a new challenge after a few years, and that is applicable to many of these individuals,” Psaki said. “It’s also an opportunity, as it is in any White House, to bring in new faces, new voices, and new perspectives.”

Ashley Etienne, Harris’s communications director, also announced last month that she would step down. Reports have said that Peter Velz, Harris’s director of press operations, is also leaving her office.

During her first 10 months in office, Harris has faced messaging challenges, intense scrutiny, and low polling numbers. There have also been anonymously sourced reports of infighting in the vice president’s office.

Previously, Sanders, 31, was hired by self-described socialist Sen. Bernie Sanders (I-Vt.) as the national press secretary for his 2016 presidential campaign. In that same year, she was also hired by CNN as a political commentator.

Later, in 2020, Sanders was hired as an adviser to then-candidate Joe Biden’s presidential campaign, frequently defending him during television appearances. In her 2020 memoir, Sanders wrote that she wanted to become the first black woman to be a White House press secretary but was passed over for Psaki.

Harris’s office has not responded to a request for comment.