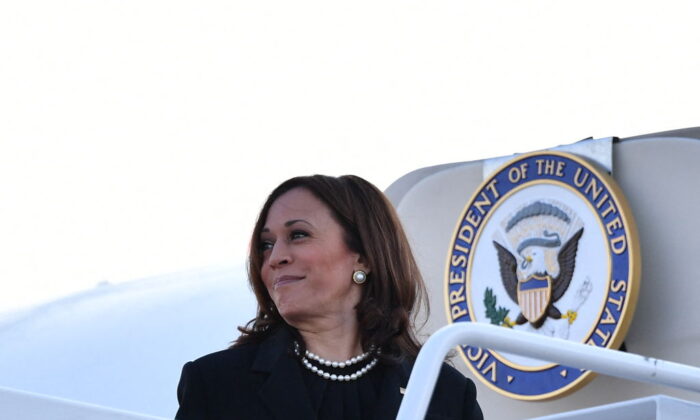 Vice President Kamala Harris spoke of the importance of November’s midterm elections Aug. 27 at a Democratic National Committee fundraiser at an estate in Newport Beach, California.

“We’re at a moment in our world and country of so much of what we took for granted is now unsettled,” Harris told the approximately 15 people in attendance. “So many things we thought were long settled—territorial interfering and sovereignty. Here at home, women’s body rights and voting rights. So much at stake.”

The White House claims it will lower costs for families, combat the climate crisis and reduce the deficit, which will help fight inflation.

The Republican National Committee, citing research from the Penn Wharton Budget Model, said it would have a “statistically indistinguishable from zero” impact on inflation and would actually slightly increase inflation until 2024.

“She talks about the importance of elections, and she’s right, but it’s because this administration has had a losing track record and this November, voters will recognize the failure of the Democrat Party,” Balch told City News Service.

The fundraiser was Harris’s only public appearance during her trip to Southern California.

Harris returned to Los Angeles on Aug. 25 after vacationing on the Hawaiian island of Kauai since Aug. 15. She was also at her Brentwood home Aug. 12–15.

She departed from Los Angeles International Airport on Aug. 28 aboard Air Force 2 for a flight to Orlando to attend Aug. 29’s planned launch of Artemis I at the Kennedy Space Center in Cape Canaveral, Florida. The uncrewed mission is the first integrated test of NASA’s deep space exploration systems that is scheduled to provide a foundation for human deep space exploration and demonstrate a commitment and capability to return humans to the Moon and extend beyond.

The launch was called off due to technical issues.