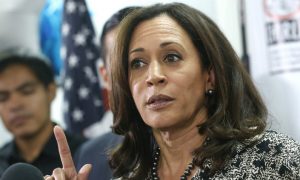 Sen. Kamala Harris speaks to reporters after announcing her candidacy for President of the United States, at Howard University in Washington on Jan. 21, 2019. (Al Drago/Getty Images)
Politics

Democratic presidential contender Sen. Kamala Harris (D-Calif.) expressed support for “Medicare-for-all” and the “Green New Deal” plans that would massively expand government spending and intervention in the energy sector, and would allow the government to wholly take over health care. The plans are estimated to cost tens of trillions of dollars.

Harris backed the plans during a CNN town hall on Jan. 28.

An audience member asked: “What is your solution to ensure that people have access to quality health care at an affordable price, and does that solution involve cutting insurance companies as we know them out of the equation?”

“I believe the solution—and I actually feel very strongly about this—is that we need to have Medicare-for-all,” Harris replied. “That’s just the bottom line.”

She said that health care “should be understood to be a right” and that “having a system that makes a difference in terms of who receives what based on your income is unconscionable.”

In contrast to Constitutional rights, which are ensured by putting restrains on the government, quality health care, as it is now, requires a large industry—worth nearly $3.7 trillion in 2018—in which people participate voluntarily and expect compensation.

Medicare-for-all has been estimated to cost over $32 trillion and would require more than doubling federal income and corporate tax revenues.

Harris’s plan, as she has acknowledged, would eliminate the health insurance industry as we know it.

Harris also has said that she supports the “Green New Deal”—a plan advocated by Rep. Alexandria Ocasio-Cortez  (D-N.Y.), who has just entered Congress and is backed by America’s largest Marxist organization, the Democratic Socialists of America.

Ocasio-Cortez proposed forming a House committee that would draft bills to put a “Green New Deal” in place. The plan not only advocates universal health care, but also transitioning to all-renewable energy sources; overhauling all real estate, infrastructure, and industry to consume less energy and generate less carbon dioxide; federal job guarantees; and guaranteed minimum income programs—all government-funded and within a decade.

The proposal acknowledges that the cost of such a program would be astronomical.

To pay for the plan, “the Federal Reserve can extend credit, … new public banks can be created … to extend credit, and a combination of various taxation tools (including taxes on carbon and other emissions, and progressive wealth taxes) can be employed,” the document states. “In addition to traditional debt tools, there is also a space for the government to take an equity role in projects.”

However a government decides to fund such a program, it would ultimately be taxpayers footing the bill—either to repay the credit or to cover the losses if the proposed state-run megaprojects run into trouble, as they historically have (pdf).

The federal government already owes nearly $22 trillion and is projected to be increasingly squeezed by interest payments. In 2018, it paid $325 billion in interest and that number will reach $460 billion in 2020—surpassing Medicaid spending—and $724 billion in 2025—surpassing defense spending—according to estimates by the Congressional Budget Office.

Ocasio-Cortez proposes taxing income above $10 million at 70 percent, which would theoretically raise $720 billion over 10 years, The Washington Post reported. But people would likely change their behavior accordingly to avoid taxes using a plethora of tricks, such as switching salary for stocks, moving overseas, or finding ways to pass on their income to spouses and children.

For those making over $10 million, wages and salaries already comprise only 15 percent of their income, CNBC reported in 2015.

Eliminating tax shelters, in turn, would crack down on abusers but also penalize those using such measures for legitimate purposes.

Critics of programs like the “Green New Deal” sometimes call it a vote-buying scheme.

The bottom 60 percent of American earners pay only about 13 percent of federal taxes, including Medicare and Social Security, while they collect about 33 percent of all after-tax income, which includes welfare and benefits, according to Tax Policy Center data from 2015.

This large-scale redistribution scheme creates an incentive for the majority of Americans to back government-funded programs, since they are largely not going to be the ones paying for them.

Promises of welfare benefits, dependent on massive government spending, have been a hallmark of Democratic Party policy for over a hundred years, according to conservative documentary producer Dinesh D’Souza.

“The whole arrangement works kind of like this: A and B make a deal to rob C,” D’Souza said in his April 30 speech at Texas State University. “C is the taxpayer. And so the idea is, ‘You vote for me, I’ll get into power and loot the treasury.’”

Update: The article has been updated with a more accurate characterization of Constitutional rights and state-run megaprojects.