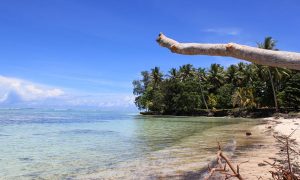 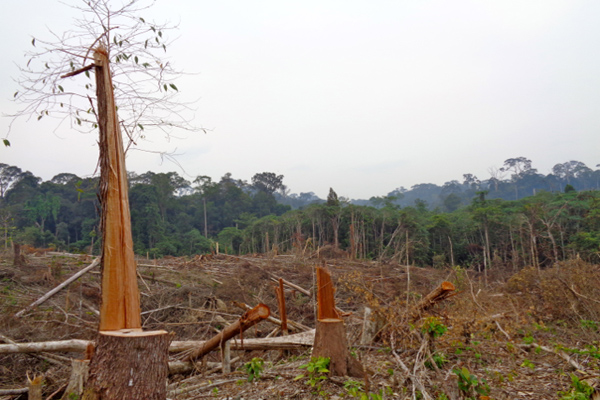 Cleared forest near the village of Tumbang Bahanei in the province of Central Kalimantan. Residents are trying to stop timber companies from encroaching on their land. Photo by Indra Nugraha.
Environment

The small village of Tumbang Bahanei is inhabited by 139 indigenous families that tend to 2,859 hectares of customary forest, 132 hectares of rice fields, 5,841 hectares of rubber forest, and 43 hectares of forest designated for “indigenous tourism.” In total, this amounts to just over 8,880 hectares. The residents know these numbers precisely, because they have been diligently mapping every corner of their territory in a desperate attempt to prevent it from being snatched up by timber companies.

The first time he was approached by a logging company, Gio explains, they visited his house to present a plan to harvest trees from 50,665 hectares of nearby forests. They unrolled a large map showing the “proposed management area” which already had approval from the local government. Gio was alarmed to see large tracts of the village’s community protected forest included in the plan.

He immediately called a village meeting, and everyone unanimously agreed to reject the company’s plan. Further, they vowed to never approve any deals in the future. But, they also realized that to secure their right of refusal, their land needed official recognition from the government.

Although a recent ruling by the supreme court of Indonesia struck down requirements that indigenous people must have written documentation proving their claims to land, interpretation of those rules still varies widely by region. And while having that documentation will not guarantee their security, it certainly won’t hurt.

“Tumbang Bahanei is the first to complete the mapping of their customary-use area,” said Alfianus Genesius Rinting, the Deputy General of Central Kalimantan’s Indigenous Peoples Alliance of the Archipelago (AMAN). “They are extraordinary. They do not tire of the work involved to coordinate this project with us. They call and visit Palangkaraya many times.”

When Mongabay-Indonesia visited the village in early September, 2014, the residents were holding a small ceremony to call on the spirits of the forest to protect it from evil, and request their ancestors to keep the forest sustainable. According to sources in the village, the people of Tumbang Bahanei cannot be separated from the forest—it is their source of life. Their entire livelihood comes from what the land produces. They are farmers and rubber tappers. Occasionally they hunt for food in the forest.

A survey by AMAN found that the forest under the village’s care is still relatively biodiverse, containing 11 species of medicinal plants, 15 species of hardwood, 174 species of other trees, 56 species of river fish, 31 species edible plants, 27 kinds of edible mushrooms, and 58 species of birds.

Community rules allow for each family to clear two hectares of land outside the core area, but these must be selected and approved by the village committee. Before any work can proceed, it must be blessed through the proper rituals. This is the way it has always been; but on May 29, 2014, these laws were officially written down for the first time.

“If you violate the law, you will be hit with a jipen,” Mr. Dagik, a resident and farmer, explained. Jipen are penalties charged for violating Dayak customary law. In the past they were paid in durable goods such as pottery or gongs. However, now they are paid in cash. One jipen is equal to 100,000 rupiah ($10), and the amount charged depends on the severity of the offense. If someone cuts a tree in the community forest, they must pay 700 jipen ($7,000) per tree. If they were to cut a tree outside the protected forest, they will be fined 100 jipen per hardwood, and 70 jipen per softwood tree. Companies that enter the customary use region without a permit are fined 2,760 jipen, while opening a new path into the region costs 550 jipen plus damages. If the company continues to violate the customary forest, their fine will increase to 55,200 jipen—or $552,000.

“Nobody dares to disturb the natural forest,” Mr. Dagik said, “because we know that this forest is the future of our grandchildren. The forest is the source of life. Don’t destroy it.”

This is not to say that the area is free of conflict. Neighboring villages do not necessarily agree with the distinctions, and people from outside the community still open the forest for agriculture or mining.

“Because we share a border with them, they feel we have expelled them. They spread rumors, which we don’t deserve,” Mr. Dagik said. The residents of Tumbang Bahanei are working to educate their neighbors, encouraging them participate in the program and present a unified front barring development.

However, environmental degradation both in and near their forest is already beginning to have an effect. Some streams already run murky and polluted from gold mines. Development companies continue to pressure the village. Meanwhile, the residents continue to wait for the local government to approve the map of their land—which they are not certain will fully protect them.

“The company knows we are mapping,” Mr. Digik said, “and they say ‘go ahead and map, later we’ll clear the forest anyway.'”

This article was written by Loren Bell and Indra Nugraha, correspondent writers for news.mongabay.com. This article is republished with permission, original here.