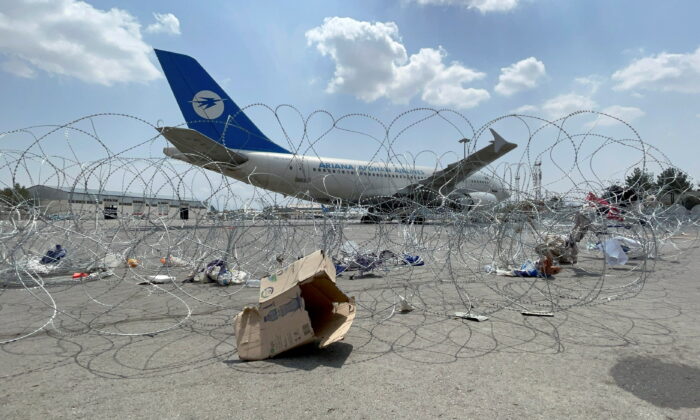 A commercial airplane is seen at the Hamid Karzai International Airport a day after U.S troops' withdrawal in Kabul, Afghanistan, on Aug. 31, 2021. (Stringer/Reuters)
Afghanistan

Qatar’s ambassador to Afghanistan announced on Saturday a technical team was able to reopen the airport in Kabul to receive aid and commercial airlines will also start operating again soon.

The airport has been closed since the United States left the Middle Eastern nation at midnight local time on Aug. 31 after ending a large-scale evacuation operation.

The envoy noted that the runway of the airport has been repaired in cooperation with authorities in Afghanistan. He also said that two domestic flights already operated from Kabul to the cities of Mazar-i-Sharif and Kandahar, Qatari news channel Al Jazeera reported.

Earlier this week, Qatari Foreign Minister Sheikh Mohammed bin Abdulrahman al-Thani said his government is still in talks with Turkey over if they potentially will provide additional technical support at the airport.

“We are working very hard [and] we remain hopeful that we will be able to operate it as soon as possible,” the minister said during a press briefing in Doha. “Hopefully in the next few days, we will hear some good news.”

In a joint news conference in Ankara on Aug. 2, Turkey’s Foreign Minister Mevlüt Çavuşoğlu said they are evaluating plans to provide assistance at Kabul’s airport.

Dutch Foreign Minister Sigrid Kaag said the Netherlands also wants to support Turkey if they agree in assisting Qatar at the airport. Kaag said she hopes the Taliban will provide safe evacuations for those who are still remaining in the war-torn nation and wish to leave the country.

U.S. Secretary of State Anthony Blinken announced on Friday that he is set to travel to Doha next week and thank Qatari leaders for their support during the evacuation effort.

Blinken also noted during that same news conference that the U.S. State Department remains “in constant contact” with Americans still in Afghanistan and who wish to leave the country.

“We continue to maintain channels of communication with the Taliban, on issues that are important,” he said. “We have dedicated teams assigned to each of these American citizens to be in constant contact with them. We’re providing them with very tailored, very specific guidance,” he added.

Republicans have been urging the Biden administration to continue rescue efforts in Afghanistan as their offices receive calls from those still stranded there.

In the desperate evacuation effort that followed the Taliban takeover, over 124,000 civilians managed to leave the country, including some 6,000 American citizens. The Biden administration estimates between 100 and 200 Americans remain in Afghanistan.