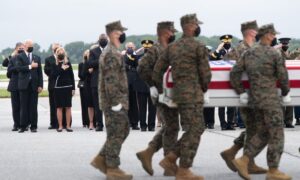 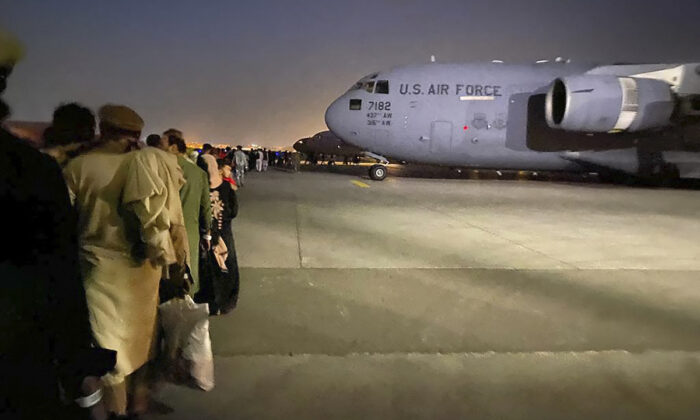 Afghan people queue up to board a U.S. military aircraft to leave Afghanistan at the military airport in Kabul on Aug. 19, 2021, after the Taliban's takeover of Kabul. (Shakib Rahmani/AFP via Getty Images)
Afghanistan

The White House said early Monday morning that operations at Kabul’s Hamid Karzai International Airport are continuing uninterrupted, amid reports of multiple rockets being fired at the airport.

According to Reuters, a U.S. official, speaking on condition of anonymity, said that as many as five rockets were intercepted by U.S. missile defense systems.

“The President was informed that operations continue uninterrupted at HKIA, and has reconfirmed his order that commanders redouble their efforts to prioritize doing whatever is necessary to protect our forces on the ground,” Press Secretary Jen Psaki said in a statement.

Psaki said that President Joe Biden had been briefed on the situation by national security adviser Jake Sullivan and Chief of Staff Ron Klain.

Afghan media reports said Monday’s rocket attack was mounted from the back of a vehicle. According to Pajhwok news agency, several rockets did strike different parts of the Afghan capital.

U.S. military cargo planes continued their evacuations at the airport after the rocket fire. U.S. forces have been working around the clock to evacuate as many U.S. citizens and at-risk Afghans as possible before Biden’s withdrawal deadline on Aug. 31. Under 4,000 U.S. troops remain at the airport.

But evacuations were thrown into chaos by a deadly suicide bombing on Aug. 26, which claimed the lives of 13 U.S. service members, 3 Britons, and around 170 Afghans. Then, Sunday saw another threat from “multiple suicide bombers,” which the U.S. targeted in a drone strike that has seen reports of civilians casualties that U.S. Central Command is investigation.

The terrorist group ISIS-Khorasan, an ISIS affiliate, claimed responsibility for the Aug. 26 attack, although self-declared acting president, the constitution’s first Vice President Amrullah Saleh, has said he believes the Taliban were involved in the bombing.

ISIS-K is reportedly made up of mostly disenchanted Taliban fighters drawn to an even more extreme view of Islam that prides itself on a focus of global, not local, jihad. They are said to be enemies of the Taliban, but have seen a boost to their ranks after the Taliban freed prisoners across the country.

Saleh is currently in the Panjshir Valley as one of the leaders of the National Resistance Front of Afghanistan. The resistance group has vowed resist the Taliban and has been negotiating with Taliban leaders for a peace deal and assurances of a representative government.

Resistance leader Ahmad Massoud told Newsweek that the resistance front, which he says has broad support from across the country beyond Panjshir Valley, is prepared to fight for Afghan’s freedoms in a broad civil uprising if the Taliban does not agree to a power-sharing deal to limit Sharia law.

“We hope that we can go for a decentralized system so different people like Taliban or non-Taliban can live with their own values wherever they want to live,” he said, “and they should not kind of impose their own values on some others.”

The Taliban has claimed that they can ensure security for the Afghan people despite the growing number of attacks or threats over the last week.

Former U.S. Secretary of State Mike Pompeo, who was involved in peace talks with the Taliban during the Trump administration, told Fox News on Aug. 27 that former U.S. President Donald Trump didn’t withdraw all U.S. troops from Afghanistan like Biden has because he didn’t have conditions to do so.