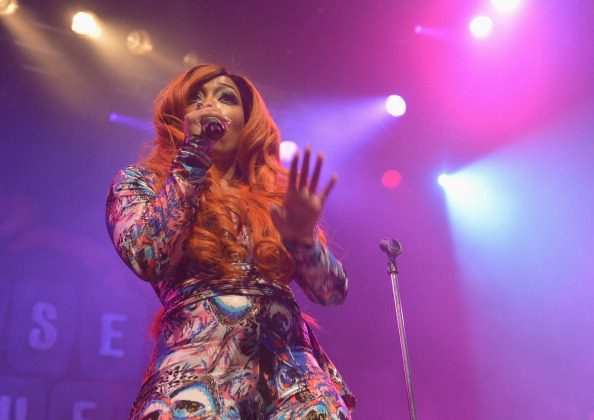 K. Michelle was allegedly victimized in a hack that resulted in the leaking of alleged nude photos of her.

Meanwhile, the singer is appearing nude (although it’s not graphic) on the cover of her album, “Anybody Wanna Buy A Heart,” which is abbreviated AWBAH.

She’s been promoting the album, due out on Dec. 9, with the #AWBAH hashtag.

Meanwhile, she talked about getting plastic surgery.

“I had fat transferred to my butt. I sucked out my stomach, you know, just normal women things,” she told Huffington Post Live. “They said ‘are you really going to do this surgery on TV’ and I said ‘yes because it’s my life and I’m not ashamed. I’m not ashamed of wanting to suck the rolls out of my stomach. I didn’t wake up like that.”

Michelle was also asked if she’s concerned about if young girls taking her example.

“You don’t have to do anything to be popular. You need to do what makes you happy. Don’t look at me as the poster-child of ‘I need to change my appearance’…. You’re beautiful however you are,” she added.

“For a long time I didn’t change my appearance. And now it’s something that I wanted to do. I woke up in the morning and wanted a little whatever, but you’re beautiful however you are.”