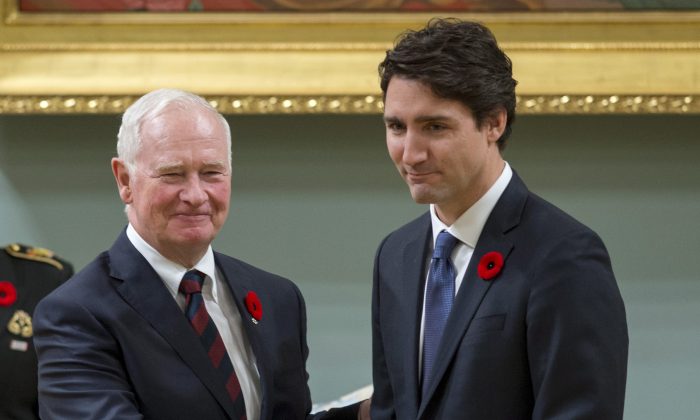 The 43-year-old Trudeau, a former school teacher and member of Parliament since 2008, became the second youngest prime minister in Canadian history.

“Government by Cabinet is back,” Trudeau said, vowing to have an open and transparent government. Power in Harper’s government was centered around his office.

The new leader is the son of the late Pierre Trudeau, who served as prime minister from 1968 to 1984 with a short interruption and remains one of the few Canadian politicians known in other countries.

Justin Trudeau mouthed “I love you” to his young family and his mother after being sworn in.

“I think of my father and how pleased he must be that Canada so firmly came together around an ambitious vision for the country that we presented,” Trudeau said.

“But my thoughts today, sorry Dad, aren’t mostly on him, but with my own kids and the kids across Canada. We are going to work very hard to ensure we have a better future.”

The new prime minister now has the chance to restore his father’s Liberal legacy, providing a generational change in the party’s leadership.

Most of Trudeau’s Cabinet members are between the ages of 35 and 50. He said he’s appointed a Cabinet that looks like Canada.

Women make up half of the Cabinet. Asked why gender balance is important is, Trudeau said: “Because it’s 2015.”

“Canadians from all across this country sent a message that it is time for real change, and I am deeply honored by the faith they have placed in my team and me,” Trudeau said earlier in a statement.

The Cabinet is scheduled to hold its first meeting in the afternoon and then face the media — a departure from the Harper era. Harper Cabinet meetings were held in secret and ministers never spoke after them.

Trudeau talks often about “sunny ways” and ran a campaign with an optimistic theme.

His youthful demeanor and enthusiasm also provides a sharp contrast with the sober and dour Harper, who stepped down as prime minister just ahead of the swearing-in ceremony.

Trudeau and his wife and his new Cabinet arrived at Rideau Hall on a bus for the swearing-in ceremony. They waved to a large crowd as they walked up the grounds to the hall. One of Trudeau’s children jumped into his arms upon seeing his father arrive.

A large crowd of onlookers witnessed the proceedings, gathering outside to watch on a pair of big-screen TVs.

Trudeau’s victory should improve Canada’s ties with the United States. Harper was angered by President Barack Obama’s reluctance to approve the Keystone XL pipeline from Alberta to Texas and it damaged relations. Although Trudeau supports the pipeline, he argues relations should not hinge on the project.

Harper, one of the longest-serving Western leaders, fought hard to reverse the image of a liberal Canada, cutting corporate and sales taxes and removing Canada from a climate change agreement.

Trudeau, by contrast, tapped into an appetite for change with a plan to reject austerity and spend billions on infrastructure, running deficits for three years to do so.

Trudeau has a busy agenda ahead with four global conferences to attend, including the G-20 summit in Turkey and the U.N. Climate Change Conference in Paris. He said Parliament will return in early December.