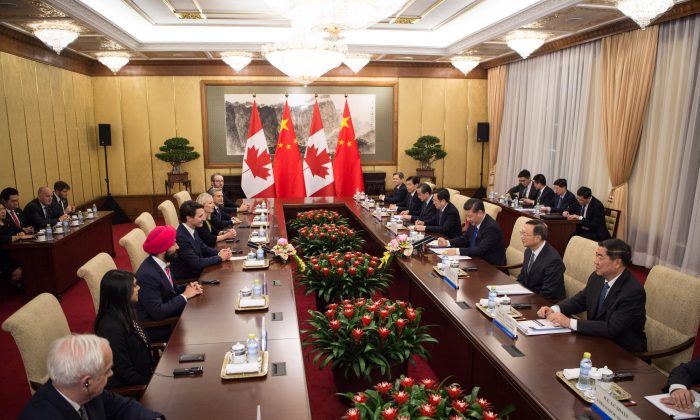 Prime Minister Justin Trudeau said he has talked with the Chinese leadership about Canadian citizens currently imprisoned in China.

Trudeau is currently on a five-day visit to China, where he met with Chinese Premier Li Keqiang on Monday and Chinese leader Xi Jinping on Tuesday.

The Canadian Press reported that Trudeau said he has raised human rights and specific consular cases and the fact that Canadian diplomats cannot visit some of the Canadians incarcerated in China.

Among the Canadian citizens currently detained in China are Sun Qian, founder of a billion-dollar company who was detained for her faith in Falun Dafa, a spiritual meditation practice persecuted by the Chinese regime; Huseyin Celil, an Uyghur dissident; and British Columbia winery owner John Chang, who was arrested along with his wife, Allison Lu, over a customs dispute issue. Lu was later released but remains unable to leave China.

“I brought them up last night—human rights and consular cases—with Premier Li and I will certainly be addressing those issues with President Xi,” Trudeau said ahead of his meeting with Xi, according to The Globe and Mail.

Before Trudeau’s trip, foreign affairs minister Chrystia Freeland told The Globe and Mail that both she and the prime minister take the cases of these four Canadians very seriously.

On Monday, no plans to launch formal free trade negotiations were announced after Trudeau and Li met privately.

Trudeau will next travel to Guangzhou, where he will meet with local officials and the business community.