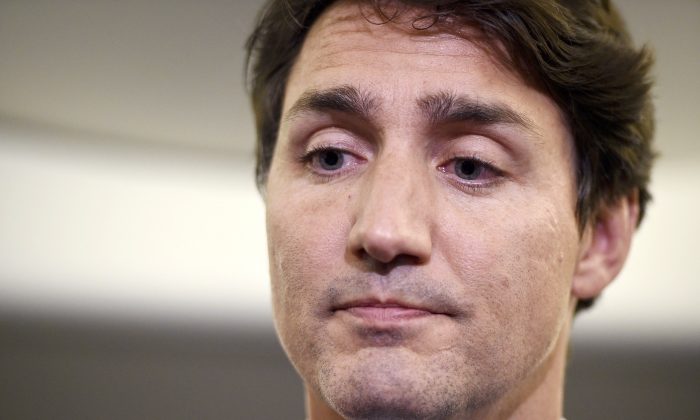 Canadian Prime Minister and Liberal Party leader Justin Trudeau reacts as he makes a statement in regards to a photo coming to light of himself from 2001, wearing "brownface," during a scrum on his campaign plane in Halifax, Nova Scotia, Wednesday, Sept. 18, 2019. (Sean Kilpatrick/The Canadian Press via AP)
Canada

Justin Trudeau apologized after a photo of him surfaced wearing “brownface” and a turban at a 2001 party.

Time Magazine posted a photo of him wearing the makeup during an “Arabian Nights” gala hosted by West Point Grey Academy in Vancouver.

“I dressed up in an ‘Aladdin’ costume and put makeup on. I should have known better, but I didn’t and I’m really sorry,” Trudeau told reporters, reported the New York Post.

“It was a dumb thing to do. I’m disappointed in myself. I’m pissed off at myself,” he added.

It shows him wearing the makeup on his hands, face, and neck along with a costume. His hand appears to be around the neck area of a woman.

“I deeply regret that I did that,” said Trudeau. “I take responsibility for my decision. It was something I didn’t think was racist at the time, but now I recognize it was racist.”

The prime minister, who recently launched a reelection bid, said it wasn’t the first time he wore similar makeup.

“When I was in high school I dressed up at a talent show and sang ‘Day-O’ with makeup on,” Trudeau said.

According to CNN, he is in a virtual tie with Conservative Andrew Scheer.

“I stand here before Canadians as I will throughout this campaign and talk about the work we have to do to make a better country together,” Trudeau said. “And I am going to continue to stay focused on that and continue to work to fight intolerance and discrimination, even though obviously I made a mistake in the past.”

Scheer pounced on Trudeau after the photo was posted.

He said, “Like all Canadians, I was extremely shocked and disappointed when I learned of Justin Trudeau’s actions this evening. Wearing brownface is an act of open mockery and racism. It was just as racist in 2001 as it is in 2019. What Canadians saw this evening was someone with a complete lack of judgment and integrity and someone who’s not fit to govern this county,” CNN reported.

The leader of the Green Party, Elizabeth May, also attacked Trudeau, 47.

“I am deeply shocked by the racism shown in the photograph of Justin Trudeau. He must apologize for the harm done and commit to learning and appreciating the requirement to model social justice leadership at all levels of government. In this matter he has failed,” she tweeted.