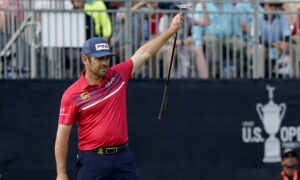 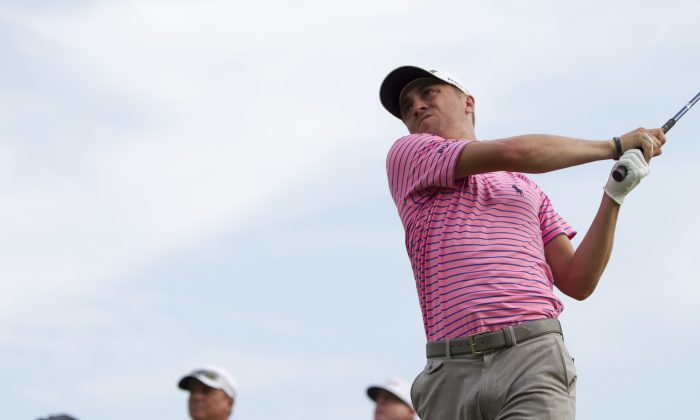 Justin Thomas watches his drive on the 14th tee during the third round of the Sony Open golf tournament, Saturday, Jan. 14, 2017, in Honolulu. (AP Photo/Marco Garcia)
Golf

NEW YORK, NY. The real PGA Tour season is just underway with the two traditional events in Hawaii kicking off the New Year. What’s evident is Justin Thomas is sending a very loud and clear message — hear me roar!

Despite his immense potential when first coming out on Tour in 2015  — Thomas received even more attention as the friend and sidekick to Jordan Spieth often playing with the two-time major champion during Tuesday money games with other Tour players involved — most notably Phil Mickelson.

The former University of Alabama star notched his first win on the PGA Tour late in ’15 in Malaysia and the promise of being something far more than a bit player in the shadows of others is now becoming truly self evident for all to see.

Since the start of the ’17 PGA Tour season — which actually commenced this past October — Thomas has won three times —  defending his title in Kuala Lumpur and snaring the last two in succession winning the star-studded WGC-HSBC Champions event at Kapalua and  just this past week setting a new 72-hole PGA Tour record in winning the SONY Hawaiian Open with a four-round total of 253 — besting the former mark by Tommy Armour III of 254. The last PGA Tour player to win the two Hawaiian golf events consecutively was Ernie Els in 2003.

Thomas is a clear example a new order is clearly present in world golf. The days of the veteran players continuing their stranglehold is now looking to be more in the rear view mirror. So much of the drumbeat has been centered on the return of Tiger Woods but until the former world number one can show conclusively he can consistently play at the world class level — the real story line rests with what golfers such as Thomas is showing.

Justin’s win last week was highlighted by a first round 59 — just the 7th to do so. That’s impressive for sure — but even more so is the fact he’s the youngest ever to do so on the PGA Tour at 23 years of age.

Now, one has to put things into some sort of perspective. Thomas has only played in five (5) majors to date — and has never finished in the top ten in any of them. Nonetheless, the overall talent Thomas has displayed has sent a very loud message to all — the youth parade is clearly moving rapidly ahead.

Joining the likes of Thomas is Japan’s immensely talented Hideki Matsuyama — the 24-year-old has three PGA Tour wins and  has five top ten finishes in the four major championships.

There was speculation another young star — Daniel Berger — was a potential Captain’s pick for last year’s USA Ryder Cup Team. That didn’t happen but the push from those under 25 years old is clearly self evident.

Thomas has much to prove for sure. Winning a PGA Tour event is no small feat — but demonstrating the capacity to be in contention and winning a major is the ultimate separation point. Spieth has won The Masters and US Open and his ’15 year came very near to winning all of the Grand Slam events in one calendar year.

The manner by which Thomas plays also resonates loudly and bodes well for him. At the Hawaiian Open last week he never took his foot off the gas. There was no let-up — no desire to “protect” a lead — rather more about extending it. Incredibly, Thomas generates exceptional distance off the tee for someone who even if soaking wet and with all his golf clothes on weighs under 140 pounds.

The PGA Tour is a long and winding road. Fast starts by any player are not uncommon. But the trends of younger players becoming more and more ready to win is no aberration. It’s here to stay. The parallel story lines have existed with the LPGA for quite a few number of years and the men’s side of the aisle is quickly showing a similar direction.

Justin Thomas is only one part of a much larger wave beginning to crest and land with a tremendous crash on players ill-prepared for the onslaught. For over 20 years the PGA Tour has rested on the back of two primary players — Woods and Mickelson. Having exalted status matters to the public — it doesn’t phase those like Thomas and others like him. The writing on the wall is not being carried out by pencil this time around but with indelible ink.