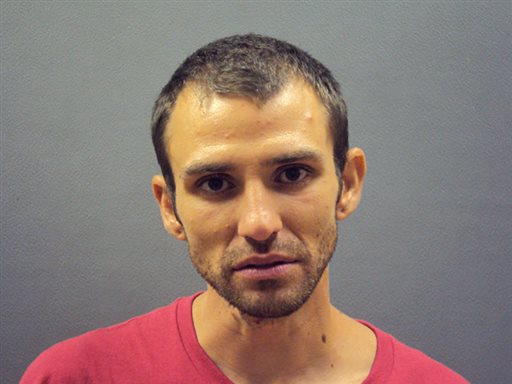 This Sept. 4, 2014 photo provided by the Bullhead City, Ariz., Police Department shows Justin James Rector, 26 of Bullhead City. Early Thursday, authorities arrested Rector on suspicion of kidnapping and first-degree murder in the death of an 8-year-old Arizona girl reported missing from her home. Police in Bullhead City said Thursday that a body found near the home is that of Isabella "Bella" Grogan-Cannella. They say a shallow grave was discovered Wednesday by a search and rescue team. (AP Photo/Bullhead City Police Department)
US

Justin Rector has been named as the suspect in the killing of young Isabella Grogan-Cannella in Arizona.

Rector was a family friend of the girl’s family, police chief Brian Williamson told reporters earlier in the week.

Grogan-Cannella vanished from her home early Tuesday and her body was found on Wednesday afternoon.

Shoe prints at the scene were matched to Rector, who is due for a preliminary hearing on September 12.

Rector had been questioned earlier in the investigation but hit out on Facebook about people who believed he was behind the kidnapping.

“Everyone gonna believe what they chose but as of now shes still not home and talking [expletive] n making threats doesnt seem like a good strategy on getting her home to me,” he said.

“Everyones a suspect but ive been interrogated and cleared no charges and im still in touch with the authorities…….”

A public defender appointed to his case did not immediately return a call.

Rector has a lengthy criminal record. Court records indicate Rector has a criminal record involving a dozen cases in the Bullhead City area between 2006 and 2014. His convictions include disorderly conduct, possession of drug paraphernalia, criminal damage, aggravated assault, assault and criminal trespassing.

Police have not released a motive or said how Grogan-Cannella died. An autopsy was being conducted Thursday, the medical examiner’s office said.

Isabella’s 10-year-old sister told authorities that she went to the restroom while she and Isabella were playing hide and seek, and when she got out, Isabella and Rector were gone, according to a statement of probable cause.

Family and friends searched for her without luck before calling police Tuesday around 1:30 a.m. PDT. Dozens of police, firefighters and volunteers later fanned out in Bullhead City neighborhoods, parks and near river areas to look for the girl.

Investigators found no signs of a break-in or struggle at the home, and Isabella’s sister told police she didn’t hear any yelling or disturbances, Williamson said.

Isabella was discovered wearing the same green, ruffled, sparkly tank top she had on when she was last seen. When found, she did not have any clothing on her lower half, according to court documents. Williamson declined to say whether she had been sexually assaulted.

When questioned about her murder, Rector told authorities he could not talk about it and requested an attorney.