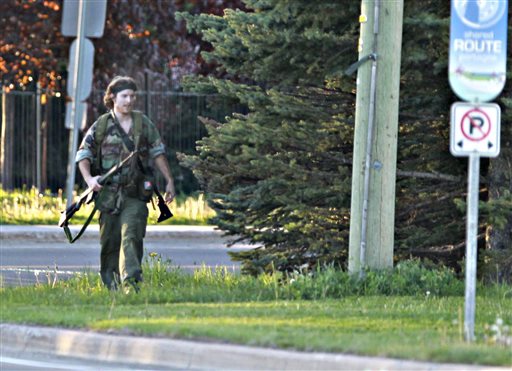 Justin Bourque, who the Royal Canadian Mounted Police suspect of shooting five of their officers–killing three-has been arrested late on June 6.

The mayor of nearby Fredericton in New Brunswick confirmed that Bourque was arrested.

The 24-year-old was spotted walking around Moncton with guns after the shooting and police had been hunting for him for over 24 hours.

Michelle Thibodeau, a singer who lives in the city, said via Twitter that a SWAT team arrested Bourque in her backyward.

“He was in my backyard. I saw him arrested in front of my eyes. He is alive. Thank you,” she said.

“The swat team arrived at my house and unloaded and started screaming in my backyard for him to surrender and he did. I watched it happen.

“They had him sprawled on my front lawn for some time and then loaded him into the swat vehicle. They are now checking my yard for firearms.”

They killings were the first homicides this year in the city of 69,000 about 180 miles (290 kilometers) east of the Maine border. RCMP Const. Damien Theriault said that the city had no homicides last year.

“We have been blessed until this point,” Theriault said

Bourque was believed to be hiding out in woods in the Pinehurst area of the New Brunswick city, and may also have a crossbow and knife.

He was spotted three times while eluding the massive manhunt that emptied roads and kept families hunkered in their homes in Moncton, an east coast city where gun violence is rare.

A large number of police officers could be seen in a part of the search perimeter with their weapons drawn, some peeking around buildings. Others were patrolling streets within the cordoned off area. Armored security trucks were also visible.

One of the vehicles, a marked police cruiser, was surrounded by shattered glass. The other, an unmarked SUV with its lights still on and the driver’s side door left open, had several bullet holes through its front windshield.

“I walked over and I saw two feet, facing the street, toes up,” said St. Louis, 51. “I realized, ‘Oh my God. There’s somebody down.’ As I got close, I realized it was an officer and this is not a good situation.”

Bourque’s Facebook page is full of posts that rail against police, and includes pictures of him with guns in the past.

Caitlin Isaac, who worked with Bourque at Walmart several years ago–before he was fired–said he told her that he wanted to “give people something to remember him for.”

“I never took him seriously, but he always said he wanted to go out with a bang and bring people with him,” she told Business Insider.

“He’s always seemed to have a problem with authority,” she says. “Issues with parents, bosses, police…” Still, she adds, he “seemed friendly enough. Little bit of an outcast, but not to this extent.” He was fired for “attitude related issues, being defiant, not doing what he was supposed to be doing — problem with authority.”

Mike Campbell, who has known Bourque since they were both two years old–and who still lives nearby–added that the pair spent a lot of time playing army games while growing up and dreaming about joining the military.

Campbell said that Bourque recently quit his job at a grocery store and was living in a trailer park.

He doesn’t know how to explain the killing spree.

“I believe he just didn’t know what to do. He was my best friend my whole life. He would be the last person I would think would do this.”