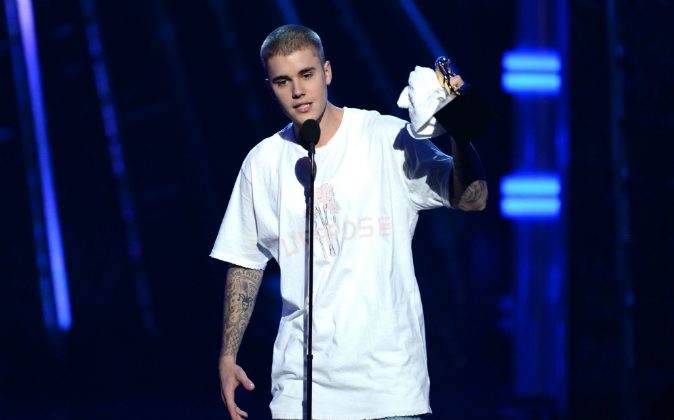 Video footage has surfaced of Justin Bieber involved in a tussle with a man outside of a downtown Cleveland Hotel.

The 13-second clip obtained by TMZ on June 9, appears to show an unidentified man shove Bieber on the left side of his face. The “Sorry” singer doesn’t take exception to this, pushing and throwing a punch at the man, before he is wrestled to the ground by the guy.

A Cavaliers shirt wearing Bieber was in town for Wednesday’s Game 3 of the NBA Finals where LeBron James and the Cavaliers defeated Stephen Curry and the Golden State Warriors.

Bieber responded to the video release by uploading a photo of his face onto Instagram.

“Not a scratch on this pretty boy,” he captioned the now-deleted black and white photo.

TMZ is reporting that the unidentified man asked for an autograph, which prompted Bieber to respond with: “No autographs tonight, [expletive].”

Bieber has been vocal in recent months about not wanting to take photos with fans, saying he feels like a “zoo animal.”

Justin Bieber on Fans’ Photo Requests: ‘I Feel Like a Zoo Animal’

“If you happen to see me out somewhere know that I’m not gonna take a picture. I’m done taking pictures,” the artist wrote on Instagram on May 10. “It has gotten to the point that people won’t even say hi to me or recognize me as a human. I feel like a zoo animal, and I wanna be able to to keep my sanity.”

He added: “I don’t owe anybody a picture. And people who say, ‘But I bought ur album,’ know that you got my album and you got what you paid for… AN ALBUM! It doesn’t say in fine print whenever you see me you also get a photo. I wanna enjoy life and not be a slave to the world and their demands of what they think I need to do!!”

Justin Bieber is currently on his Purpose World Tour.