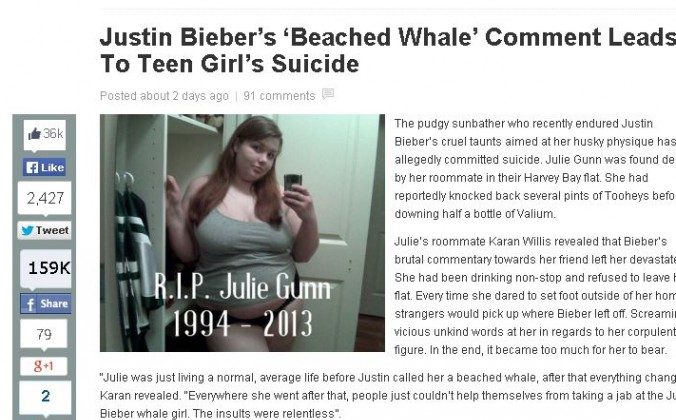 A screenshot of the National Report shows the article in question.
Social Media

Justin Bieber’s “beached whale” comment to a teen fan named Julie Gunn causing her suicide isn’t real, as the report claiming as much is from a satire news site called the National Report.

The fake story, “Justin Bieber’s ‘Beached Whale’ Comment Leads To Teen Girl’s Suicide,” has generated hundreds of thousands of “likes” and shares on Facebook, with a number of people believing the story is real. It claims the girl “the pudgy sunbather who recently endured Justin Bieber’s cruel taunts aimed at her husky physique has allegedly committed suicide.”

A disclaimer from the National Report says that the “National Report is a news and political satire web publication, which may or may not use real names, often in semi-real or mostly fictitious ways.”

It has published false news stories including a “rape festival” in India, which was shared nearly a million on Facebook, and the site posted a fake article about the person who won the Mega Millions lottery in California, also getting hundreds of thousands of “likes” and shares.

A later article from the National Report has said that Bieber’s “retirement” has “caused a fan’s suicide,” and it also claimed the victim was named Julie Gunn as well. The article posted a picture of a different girl, claiming it was Gunn and offered different circumstances of death and a different location. It reads: “Julie Gunn’s corpse was discovered in her Harvey Bay flat after she had succumbed to a self-inflicted fatal overdose of cheap beer and barbituates. Days prior to her death she was attending a hotel party where she was harassed by Justin Bieber.”

At least one media entity has been fooled by the Bieber-caused suicide report.

The International Business Times’ Australia edition reported on the National Report article as if it were fact, apparently not realizing it was a satire. “It is going to take a lot more damage control to reinstate the reputation of 19-year-old Canadian singer. Some claim that Justin Bieber should be held liable over the demise of the girl he pushed over the edge with his awful comments,” the Times report says.

“One girl who was gorgeous looking, with long dark hair and would have been about a size 14. Justin looked over at her and said ‘What are you, Hawaiian or something?’ She said ‘No, I’m not’. Then he said ‘You look like a beached whale’ … The girl said ‘Are you serious’ and he said ‘You should go on The Biggest Loser,’” Robinett said.

She added: “The whole pool deck heard him call this beautiful young girl a beached whale. Everyone heard. And there was silence. It was almost like his security were used to it.”

Another pool guest confirmed what Robinett said. “I also told her not to take any notice of him as she walked past us, I’m not sure if she heard me. Bieber seemed to think he was funny, he was smiling and looking to his burly minders for their approval,” the unnamed woman said.