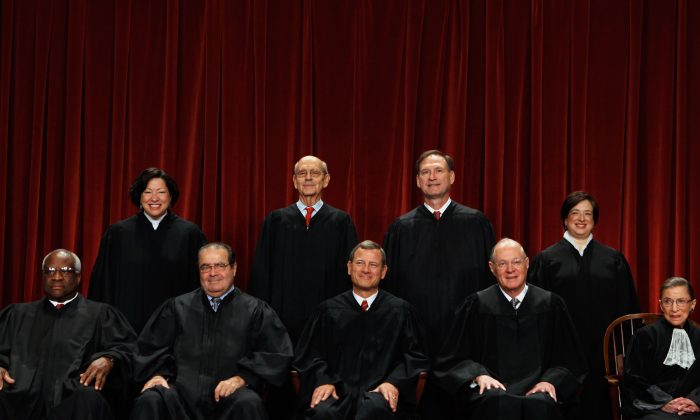 WASHINGTON  — Acting in the aftermath of the San Bernardino mass shooting, the Supreme Court on Monday rejected an appeal from gun owners who challenged a Chicago suburb’s ban on assault weapons.

Two conservative justices said they would have heard the case and struck down the ban. The Illinois State Rifle Association, one of the plaintiffs, indicated that it would keep challenging local gun restrictions.

The court, though, left in place a lower court ruling that found that local governments have leeway in deciding how to regulate firearms. The federal appeals court in Chicago had upheld the city of Highland Park’s 2013 law that bans semi-automatic weapons and large-capacity magazines.

In October, the federal appeals court in New York largely upheld similar laws in Connecticut and New York, among a handful of states that ban semi-automatic weapons.

The Supreme Court has repeatedly turned away challenges to gun restrictions since two landmark decisions that spelled out the right to a handgun to defend one’s own home.

“The overwhelming majority of citizens who own and use such rifles do so for lawful purposes, including self-defense and target shooting,” Thomas wrote.

The case had been under consideration at the high court for two months, but the delay in dealing with it now appears mainly due to waiting for Thomas to finish his opinion.

The appeal filed by Dr. Arie Friedman and the Illinois State Rifle Association argues that Highland Park has violated their constitutional rights by banning some of the most popular semi-automatic guns in the United States, as well as ammunition magazines of more than 10 rounds.

Stephen Elrod, an attorney for the city of Highland Park, said the court’s decision didn’t surprise him.

“When we drafted the ordinance in the first place, we did it in a way that fell within the teachings of prior United States Supreme Court decisions,” he said.

Richard Pearson, the director of the Illinois State Rifle Association, was disappointed the Supreme Court did not hear the case but said his organization is still waiting for the conclusion of a state-court case challenging a similar ban in Illinois’ largest county, Cook County. He said the group will also keep looking for new plaintiffs in areas that have enacted assault-weapons prohibitions.

Judge Frank Easterbrook wrote for the court that there is a “substantial benefit” to the Highland Park ordinance if it makes the public feel less at risk from a mass shooting. Variations of the Bushmaster AR-15, one of the guns specifically banned by Highland Park, were used in the Newtown, Connecticut school massacre and the theater shootings in Aurora, Colorado.

Highland Park police Chief Paul Shafer said his department has confiscated weapons under the ban three times, and in all three cases police discovered the guns while responding to unrelated actions involving the guns’ owners.

The gun control laws that the appeals court in New York upheld in October were passed after the 2012 massacre in Newtown.

Seven states and the District of Columbia have enacted laws banning assault weapons. The others are California, Hawaii, Maryland, Massachusetts and New Jersey, according to the Law Center to Prevent Gun Violence. In addition, Minnesota and Virginia regulate assault weapons, the center said.