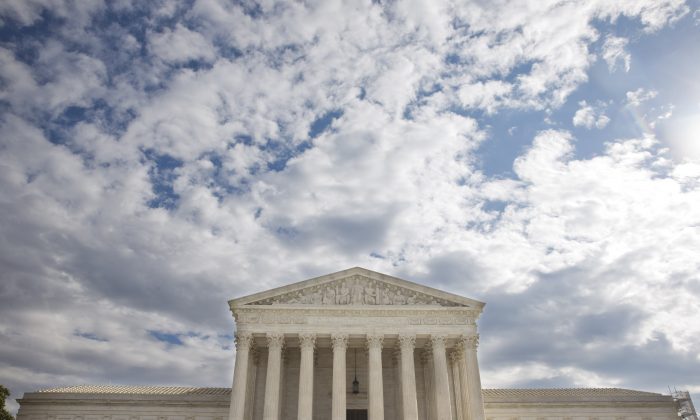 This Oct. 13, 2015, photo shows the Supreme Court in Washington. The Supreme Court has so far resisted elaborating on two landmark decisions that established a nationwide right to defend one's home with a gun. That could change with a new appeal filed by gun owners that challenges a Chicago suburb's assault weapons ban.(AP Photo/Jacquelyn Martin)
US

WASHINGTON — The Supreme Court has so far resisted elaborating on two landmark decisions that established a nationwide right to defend one’s home with a gun.

That could change with a new appeal filed by gun owners that challenges a Chicago suburb’s assault weapons ban.

The appeal by Dr. Arie Friedman and the Illinois State Rifle Association argues that the City of Highland Park has violated their constitutional rights by banning some of the most popular semi-automatic guns in the United States, as well as ammunition clips of more than 10 rounds.

The justices put off consideration of the appeal last week. In recent years, the court has almost always deferred action on an appeal before agreeing to take it up.

The court could say as early as Monday whether it will hear the case.

Friedman is a practicing pediatrician and owner of semi-automatic weapons. He lost a bid for the state Senate as a Republican in 2012 in a campaign in which some conservatives complained about his support for abortion rights. In recent days, Friedman has used his Twitter account to offer tips for Israelis who want to arm themselves in public. He did not respond to messages left with his medical practice.

The Supreme Court’s 2008 decision in District of Columbia v. Heller and the 2010 decision in McDonald v. Chicago focused mainly on the right to defend one’s own home. Gun rights groups have failed repeatedly to get the justices to say how broadly the Second Amendment protects gun rights.

The court has turned away challenges to gun laws at least three other times in cases that involved whether people have a right to be armed in public.

“If a ban on semi-automatic guns and large-capacity magazines reduces the perceived risk from a mass shooting and makes the public feel safer as a result, that’s a substantial benefit,” Judge Frank Easterbrook wrote for the court. Variations of the Bushmaster AR-15, one of the guns specifically banned by Highland Park, were used in the Newtown, Connecticut, school massacre and the theater shootings in Aurora, Colorado.

In dissent, Judge Daniel A. Manion said individuals, not elected officials, get to choose which guns they prefer for self-defense.

“To limit self-defense to only those methods acceptable to the government” creates an “enormous transfer of authority from the citizens of this country to the government — a result directly contrary to our Constitution and to our political tradition,” Manion wrote.

Twenty-four states and other gun-rights groups are supporting the appeal at the Supreme Court.

The justices’ refusal to say more about gun rights has allowed, even encouraged, federal judges to take a narrow view of the meaning of the Second Amendment, West Virginia Attorney General Patrick Morrisey said on behalf of the states. “It is time for this court to intervene.”