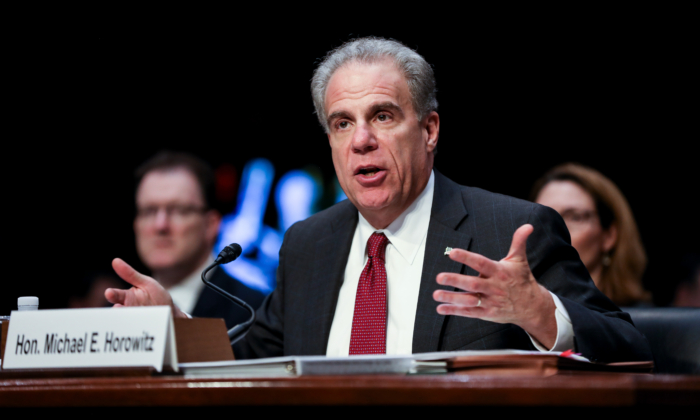 Horowitz appeared before the Senate Judiciary Committee two days after releasing a voluminous report examining the FBI’s applications for Foreign Intelligence Surveillance Act (FISA) warrants to surveil Carter Page, the Trump 2016 campaign associate. The report found that the initial application and the three renewal applications included 17 significant errors, several of which resulted from the FBI withholding evidence that would have harmed the chances of obtaining the warrants.

Republicans excoriated the failures and signaled that they would lose confidence in the FISA statute unless the secret surveillance court and the FBI implemented significant reforms to prevent future abuse. Horowitz included a list of suggested changes as part of the report. FBI Director Christopher Wray announced changes he plans to make at the bureau shortly after the report became public on Dec. 9.

The inspector general also responded, for the first time, to criticism of some of his office’s conclusions lodged by Attorney General William Barr and U.S. Attorney John Durham. In a statement issued on the heels of the IG report, Barr said “malfeasance and misfeasance” detailed in the document reflected “a clear abuse of the FISA process.” Durham, in a separate statement, disagreed with Horowitz’s conclusion about whether the FBI had the grounds to open an investigation of the Trump campaign. Barr assigned Durham earlier this year to investigate whether the Crossfire Hurricane probe and the accompanying spying on the Trump campaign were free of improper motive.

Horowitz told lawmakers that neither Barr nor Durham have provided information to his office that would change his conclusions. According to Horowitz, Durham has specifically disagreed that the FBI had a legal predicate to start a full investigation and should have begun a preliminary investigation. While preliminary investigations allow for the use of confidential informants, FBI investigators are prohibited from seeking more intrusive surveillance methods, including a FISA warrant, which the bureau secured to spy on Page.

In testimony, Horowitz stuck to the content of his report, but on occasion, used stronger language than the measured statements in the 476-page document. Horowitz said the surveillance of the Trump campaign was illegal because the Foreign Intelligence Surveillance Court (FISC) wasn’t apprised, as it should have been, of all the relevant information about Page.

“If you don’t have a legal foundation to surveil somebody and you keep doing it, is that bad?” Sen. Lindsey Graham (R-S.C.) asked Horowitz.

“It’s not court-authorized surveillance,” he added.

In testimony, Horowitz also confirmed that claims from the so-called Steele dossier made up the entirety of the FBI’s argument for probable cause in the FISA warrant applications. This conclusion vindicates House Republicans who have since last year claimed that the Steele dossier played a crucial part in the bureau’s obtaining the FISA warrants.

The dossier’s crucial role is significant because Horowitz found that the FBI was in possession of evidence that undermined the credibility of Steele and his sources, but withheld that evidence from the court. Horowitz testified that the FBI interviewed Steele’s primary-level dossier source, who made several claims to the agents that contradicted the claims in the dossier. The source also cast doubt on the credibility of Steele’s other sources.

The bureau never apprised the FISC about what it learned.

The testimony also brought to the forefront the differing views, even among members of the Republican Party, about the loopholes in the FISA statute that are ripe for the kind of abuse exposed in Page’s case. Sen. Mike Lee (R-Utah) has long pushed to reform the FISA process to shield Americans against surveillance abuses. His colleague on the Judiciary Committee, Sen. Ben Sasse (R-Neb.), is a national-security hawk who believes that FISA is essential. During the hearing, Sasse conceded that the kind of abuses Lee has warned about for years all occurred in the FBI’s surveillance of Page.

“As a national security hawk, I have argued with Mike Lee—in the four and a half or five years that I’ve been in the Senate—that stuff just like this couldn’t possibly happen at the FBI and the Department of Justice,” Sasse said.

Horowitz emphasized the failures weren’t limited to a few individuals but were systemic throughout the entire chain of command across three separate investigative units. The FBI officials involved consistently failed to provide the inspector general’s office with satisfactory explanations for the missteps, Horowitz said.

“We are deeply concerned that so many basic and fundamental errors were made by three separate, hand-picked investigative teams, on one of the most sensitive FBI investigations,” Horowitz said, “after the matter had been briefed to the highest levels within the FBI, even though the information sought through use of FISA authority related so closely to an ongoing presidential campaign, and even though those involved with the investigation knew that their actions were likely to be subjected to close scrutiny.

“We believe this circumstance reflects a failure not just by those who prepared the FISA applications, but also by the managers and supervisors in the Crossfire Hurricane chain of command, including FBI senior officials who were briefed as the investigation progressed.”

President Donald Trump has long derided the officials involved in the probe of his campaign, claiming that they conspired in an attempt to undo the results of the 2016 election. He reiterated his claim shortly after being briefed on the IG report.

“It’s a disgrace what’s happened with the things that were done to our country,” Trump said. “It’s incredible, far worse than what I ever thought possible.

“They fabricated evidence and they lied to the courts,” Trump added. “This was an attempted overthrow and a lot of people were in on it, and they got caught.”

Horowitz didn’t find evidence to support the claim of a conspiracy. The Office of the Inspector General interviewed more than 100 witnesses and reviewed more than 1 million documents since launching the review in March last year.

A number of FBI officials directly involved in preparing and signing the FISA warrant applications have all either left or been fired from the bureau, including Director James Comey, Deputy Director Andrew McCabe, and Deputy Assistant Director Peter Strzok.

Comey signaled on Twitter that Horowitz’s report vindicated him, writing, “So it was all lies. No treason. No spying on the campaign. No tapping Trump’s wires. It was just good people trying to protect America.”

“Is that a fair assessment of your report?” Graham asked, in reference to Comey’s statement.

Horowitz responded, “I think the activities we found here don’t vindicate anybody who touched this.”