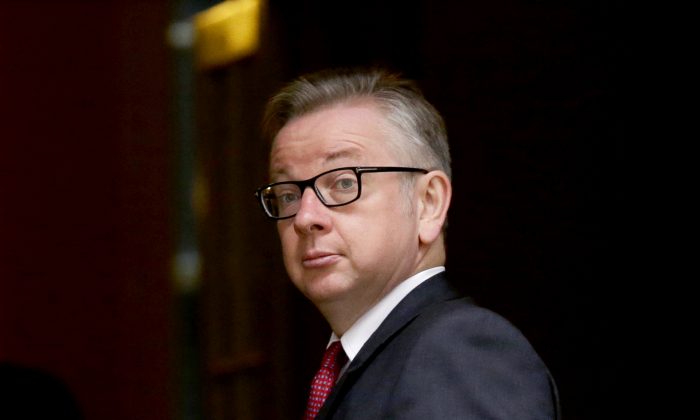 LONDON—Political healing after Britain’s vote to leave the European Union seemed a distant prospect Friday, as Justice Secretary Michael Gove ramped up his Conservative leadership bid, and a senior colleague called for him to step aside.

Gove’s surprise entry into the leadership race led former London Mayor Boris Johnson — his erstwhile ally in the EU “leave” campaign — to drop out on Thursday.

Gove plans to spell out his plans for Britain’s post-European Union future in a speech Friday.

Gove is up against Home Secretary Theresa May and three others to succeed David Cameron as party leader — and prime minister.

Gove had been expected to back Johnson for the top job, and some Conservatives are furious at his betrayal.

Kenneth Clarke, a former justice secretary, said Friday that Gove “would all do us a favor if he stood down now and speed up the process” of finding a successor to Cameron, who announced his resignation after losing the referendum to keep Britain in the EU.

Clarke told the BBC that “one of the first priorities for a leader of a party and certainly a prime minister is that you should have the trust, as far as possible, of your colleagues.”

Several Cabinet ministers have announced their support for May, considered a tough politician capable of standing up to EU officials.

Conservative lawmakers will whittle the field down to two before the final decision is made by party members.

The winner will be announced Sept. 9, and will face the challenge of starting British exit negotiations with the EU.

The result of last week’s referendum has rattled Britain’s economy and divided the country — 52 percent of voters wanted to leave the 28-nation bloc, while 48 percent voted to remain.