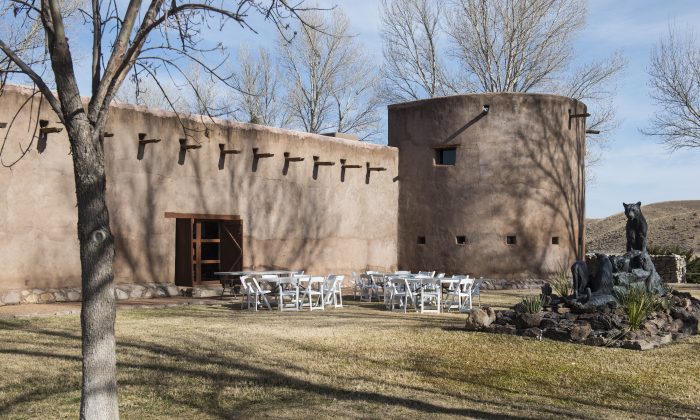 A portion of Cibolo Creek Ranch where Supreme Court Justice Antonin Scalia spent time the night before he was found dead in his room at the West Texas Resort ranch that stretches over 30,000 acres, February 14 , 2016 in Shafter, Texas. Justice Scalia was 79. ( Matthew Busch/Getty Images)
US

Justice Scalia Spent His Last Hours With a Secret Society of Hunters: Reports

When Supreme Court Justice Antonin Scalia died, he was at a West Texas ranch that was known to be a venue for a secretive society of high-class hunters that’s more than 300 years old and traces its origins to the Holy Roman Empire.

A review of public records indicates that a number of men who were at the ranch with Scalia when he died were members of the International Order of St. Hubertus, the Washington Post reports. Two men with leadership positions in the Order had landed their private planes at the ranch over the weekend.

Despite rumors that there was foul play involved in Scalia’s death, the FBI has refused to investigate.

The Order was founded in 1695 by a Bohemian Count, in what was then the Holy Roman Empire—now in the Czech Republic—and counts Emperor Charles VI and members of various noble families among its original roster, according to its website.

“The Order was a knightly order with an emphasis on hunting and activities related to the pursuit and management of game animals,” reads a description on its website. “In the Middle Ages and again with the revival of interest in the forms of chivalry in Europe, hunting was considered a basic preparation for warfare and was held among the highest activities a gentleman could pursue.”

A photo on the organization’s homepage shows a gathering in Madrid in 2013, with a throng of old men draped in red and green capes.

The first American chapter of the Order was founded in 1968.

The owner of Cibolo Creek Ranch, where Scalia died, refused to confirm any connections between the Justice and the Order.

“There is nothing I can add to your observation that among my many guests at Cibolo Creek Ranch over the years some members of the International Order of St. Hubertus have been numbered,” Poindexter said in an email, according to the Washington Post. “I am aware of no connection between that organization and Justice Scalia.”

Scalia’s Legal Originalism: Does It Exist in Canada?

Despite rumors that there was foul play involved in Scalia’s death, the FBI has refused to investigate, citing reports from marshals that he died of natural causes.