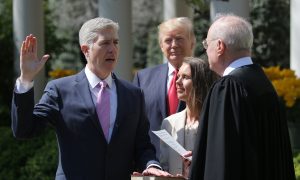 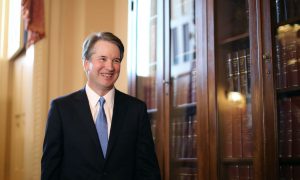 Supreme Court Justice Neil Gorsuch said Americans need to pay more attention to the “separation of powers” in order to ensure that our freedoms continue to endure.

Gorsuch made the comments on Tuesday during a rare interview with “Fox & Friends” where he discussed his new book “A Republic If You Can Keep It,” the importance of being faithful to the original meaning of the Constitution, and why paying attention to the concept of “separation of powers”—a doctrine under constitutional law where the executive, legislative, and judicial branches are kept separate—is essential to protecting American people’s rights.

“What [James] Madison knew is that people are not angels and that we need to separate powers to keep us free,” Gorsuch told the program’s co-host Ainsley Earhardt. “I worry today when I read that only about a third of Americans can name the three branches of government.”

“And 10 percent of Americans apparently believe that Judith Sheindlin serves on the United States Supreme Court,” he continued. “You know her as Judge Judy. I love Judge Judy, but she’s not one of my colleagues.”

“And, the truth is that our rights, including the separation of powers, are only as good as the people who want to keep them there,” he added.

During the interview, he also discussed his judicial philosophy and explained what it means to adopt an originalist approach to the Constitution.

“I want an enduring Constitution and the idea of originalism is just simply that judges should follow the original meaning of the words on the page,” Gorsuch said. “And, neither add things that aren’t there nor take away things that are there. And, I worry that both of those things happen when we depart from the original meaning of the Constitution.”

“A judge’s job is to be faithful to the Constitutional at all times. Nothing more. Nothing less,” he said.

Gorsuch’s interview sparked a discussion on social media with many liberal critics complaining that the justice would appear on Fox News. CNN’s Brian Stelter was among them, who appeared upset over Gorsuch’s appearance when he posted to Twitter: “How is it appropriate for a Supreme Court justice to try to goose sales of his three-month-old book by chatting on one of the most partisan shows on TV?”

Many other people quickly pointed out to Stelter that Gorsuch’s left-leaning colleagues such as Justices Ruth Bader Ginsburg and Sonia Sotomayor have frequently appeared in media interviews.

This is hardly unprecedented: Justice Breyer and Justice Sotomayor appeared on Colbert to sell their books, Justice Ginsburg on MSNBC. Also, Justice Gorsuch appeared on CNN in September. https://t.co/95gqCADimD

Meanwhile, some critics have expressed outrage because Gorsuch started his interview with “Merry Christmas,” claiming that it was a Republican talking point.

Supreme Court Justice Neil Gorsuch just appeared on Fox and Friends this morning, making a point to parrot the “Merry Christmas” talking point of the GOP. If he’s willing to go on Fox and throw a shout out to Republican narratives, what ele is he willing to do? pic.twitter.com/doJ5BUEFQg

On Fox News, Neil Gorsuch made a point to say “Merry Christmas” like he just gained the freedom to say it under Trump. This guy is such a worst case scenario of a stolen Supreme Court seat. pic.twitter.com/qf7YKbF3uy

Gorsuch, who hails from Colorado, was nominated to the Supreme Court in 2017 by President Donald Trump. He previously clerked for Justice Byron White and Justice Anthony M. Kennedy of the Supreme Court of the United States.