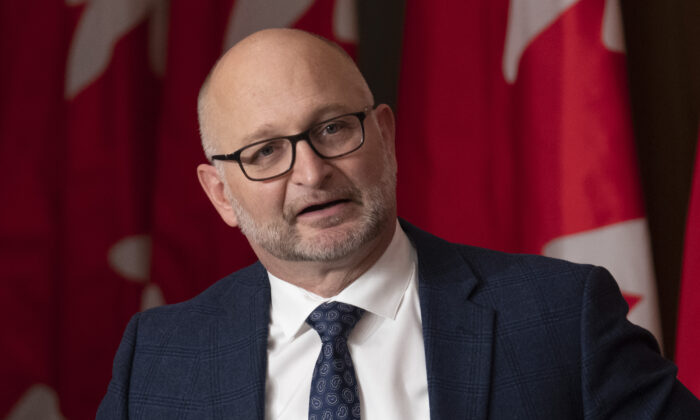 Justice Minister and Attorney General of Canada David Lametti responds to a question during a news conference on Nov. 26, 2021 in Ottawa. (The Canadian Press/Adrian Wyld)
Canada

Testifying before the Senate legal committee on Sept. 21, Lametti said that minimum mandatory penalties were having a “negative impact” on black and indigenous communities.

“You couldn’t have a conditional sentence order for an indigenous mother who was caught in very low level of trafficking in order to put bread on the table,” Lametti said, as first reported by Blacklock’s Reporter. “That’s the kind of social problem that needs to be attacked at its root and we’re trying to do that here.”

The Senate committee is reviewing Bill C-5, which aims to amend the Criminal Code and the Controlled Drugs and Substances Act in order to repeal 20 mandatory minimum sentences—mostly for certain drug and gun offences—and allow judges to grant more conditional sentences.

Some senators expressed concern that the legislation would allow serious offenders to get off without any jail time. Lametti said in response that “serious crimes will always face serious sentencing.”

“You’re presuming that the minimum will always be the sentence imposed,” Lametti said, before adding that the bill aims to remove certain minimum sentences “only to provide flexibility.”

Conservative MP and justice critic Rob Moore said in a post on Twitter on Aug. 30 that C-5 is a “soft-on-crime bill” that would allow repeat offenders to be “put back in our communities instead of serving mandatory jail time.”

Conservative MP Michael Cooper said in the House of Commons in December last year that Bill C-5 “would roll back sentences for some very serious drug offences.”

“I agree that Canadians struggling with addiction should have access to treatment and not just to prison but this bill does nothing to address that,” said Senator Denise Batters (Sask.) at the committee hearing. “The mandatory minimums this bill actually seeks to eradicate only target serious criminals who prey on those with addictions.”