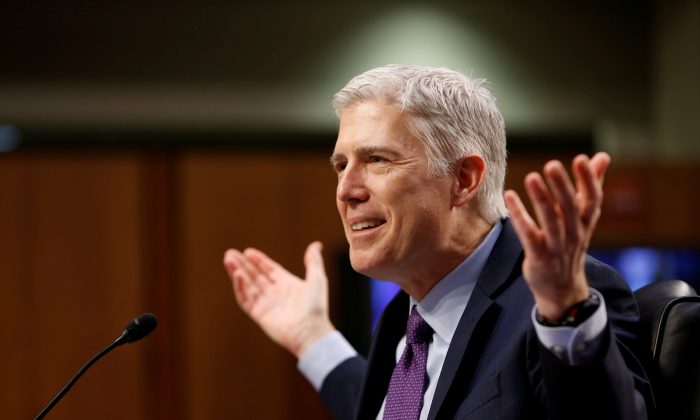 Supreme Court Justice Neil Gorsuch upbraided Fredericksburg, Virginia, for denying a tax exemption to two church leaders living in a church-owned house, after the city determined that the church’s own governing documents undermined its claim that the leaders were entitled to a tax exemption.

Gorsuch was the sole dissenter from the Supreme Court’s Jan. 18 decision not to take up the case known as Trustees of the New Life in Christ Church v. City of Fredericksburg, court file 21-164, an appeal from a March 3, 2021, decision of the Supreme Court of Virginia. There was no indication of how many justices voted to steer clear of the appeal. At least four of the nine justices would have had to vote to hear the case in order for the high court to have accepted it.

In his dissenting opinion (pdf), Gorsuch, who was nominated by President Donald Trump and confirmed by the Senate in April 2017, wrote: “I would grant the petition and summarily reverse. The First Amendment does not permit bureaucrats or judges to ‘subject’ religious beliefs ‘to verification.’ About this, the Court has spoken plainly and consistently for many years.

“Such governmental intrusions into ecclesiastical questions are ‘impermissible,’” Gorsuch wrote, citing precedent. “Absent proof of insincerity or fraud, a church’s decisions ‘on matters purely ecclesiastical, although affecting civil rights, are accepted in litigation before the secular courts as conclusive.’

“The Framers of our Constitution were acutely aware how governments in Europe had sought to control and manipulate religious practices and churches. They resolved that America would be different. In this country, we would not subscribe to the ‘arrogant pretension’ that secular officials may serve as ‘competent Judge[s] of Religious truth,’” Gorsuch wrote, quoting James Madison.

“Bureaucratic efforts to ‘subject’ religious beliefs to ‘verification’ have no place in a free country,” the justice concluded.

Although the relevant part of the Virginia Code doesn’t define the word “minister,” the law provides an exemption from property taxes for “real property and personal property owned by churches … and exclusively occupied or used … for the residence of the minister of any church or religious body,” according to the church’s petition (pdf) to the Supreme Court.

New Life in Christ Church invoked the tax exemption for a property occupied by Josh and Anacari Storms. The church argued the Stormses were “ministers” according to the Presbyterian Church in America’s Book of Church Order because they were hired to teach and spread the faith to college students in the community.

Fredericksburg officials agreed that eligibility for the exemption turned on whether the Presbyterian Church in America considered the Stormses to be ministers, but refused the exemption. According to the city’s interpretation of the Book of Church Order, only ordained persons with specific duties are deemed ministers of that church.

“The church is free to name as many minsters [sic] as it wishes, but the Virginia Code permissibly provides a real property tax exemption for one residence only—‘The residence of the minister of the church,’” the city argued in a brief (pdf).

“This case was never about delving into ecclesiastical pursuits or abridging the Church’s right to exercise its religion.”

“This is a travesty, and it is dangerous. If a government bureaucrat can determine theology and tell a church who is or is not a minister, we are in trouble,” Shackelford said in a statement.

“We’re disappointed that the Supreme Court allowed this dangerous abuse of government authority to stand.”

The Epoch Times reached out for comment to Steven Ray Minor, counsel of record for Fredericksburg, but hadn’t received a reply as of press time.