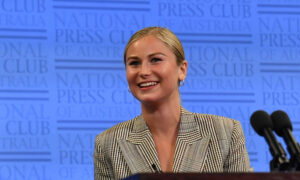 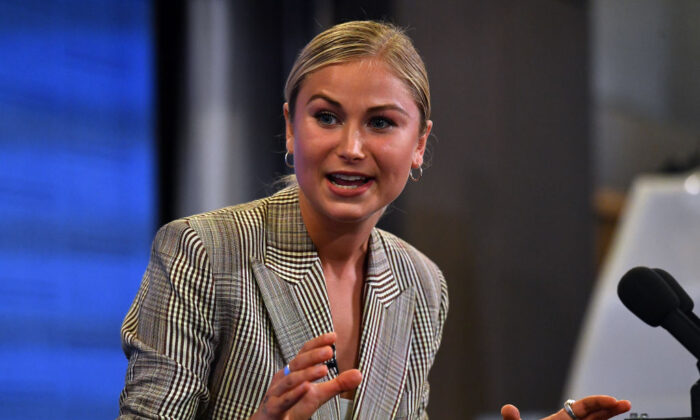 Australian of the Year Grace Tame spoke at one of the nation-wide “Women’s March 4 Justice” rallies on Monday, calling for an end to sexual violence against women while also making a point to say that men are not the enemy.

Speaking at a rally in Hobart, in the southern island state of Tasmania, Tame said all woman had a story of some form of sexual violence or abuse.

But she made a point of telling the crowd to place the blame for sexual assault on corrupt behaviour, and not solely on men themselves, while also saying that in the pursuit of seeking justice, people did not have to be adversarial.

“Men are not the enemy,” Tame told a crowd. “Behaviour. Corrupt behaviour always has been, and always will be the enemy.”

Tame has been pivotal in overturning laws that sought to stop victims of sexual assault and abuse from speaking out in public and called on Australians to continue to speak up about the issue.

Tame was a victim of severe sexual abuse by a man over a prolonged period of time. But it was also a man—Dr. William Simon—whom she first told about her abuse, and whose absolute faith in her story gave her the courage to speak to the police, she said in a speech to the National Press Club.

Speaking in Hobart on Monday, Tame called on all Australians to call out abusive behaviour when they see it.

She noted that her home state of Tasmania had been pivotal in helping to create a “paradigm shift” toward “normalising the conversation of sexual abuse.”

She told the crowd not to be afraid to stand up against abuse, even when they might be afraid to.

The “March 4 Justice” rallies were organised after Brittany Higgins, a former female parliamentary staffer, came forward with a detailed allegation of rape that occurred inside Parliament House.

Speaking at a rally in Canberra on Monday, the ABC reported that Higgins said, “We are all here today, not because we want to be here but because we have to be here.”

“One out of every five women in Australia will be sexually assaulted or raped in their lifetime,” she said. “If you are a woman of colour, the statistics are even higher.”

Higgins called on politicians to commit to addressing the issues of violence against women, noting that there had been a lack of action, which she claimed was causing women to question whether or not the government would be proactive in addressing the issue.

“This isn’t a political problem. This is a human problem,” Higgins said. “It’s time our leaders on both sides of politics stop avoiding the public and side-stepping accountability. It’s time we actually address the problem.”

The rally organisers have said they were calling for all politicians to address the issues of sexism, misogyny, dangerous workplace cultures, and lack of equality in politics and the community at large.

Opposition Leader Anthony Albanese, who attended the rally, said in Parliament that all Australians need to do better on this issue.

“All of us need to do better. All political parties, all businesses, all workplaces, our entire society,” Albanese said.

“Because sexual assault and these issues are about the power imbalance in society. That’s what it’s about. And that’s why women are demanding change. And they’re entitled to get it.”

Meanwhile, the rally organisers turned down an offer by Prime Minister Scott Morrison and Minister for Women Marise Payne to meet at Parliament House, so they could listen to the issues and engage in conversation with the group.

Speaking in Parliament on Monday, the ABC reported that Payne said the government acknowledged that there were cultural issues in the seat of power and the government’s decision to launch an independent review into how the culture could be improved was proof of that.