When Trump fired Comey on May 9, 2017, the White House issued a statement saying that Trump “acted based on the clear recommendations of both Deputy Attorney General Rod Rosenstein and Attorney General Jeff Sessions.”

On May 9, Rosenstein wrote a scathing memo recommending that Trump fire Comey over his mishandling of the Hillary Clinton email investigation. Rosenstein listed three major breaches of Justice Department policy carried out by Comey.

According to Rosenstein, the former FBI chief usurped the power of the attorney general by making a public statement exonerating Clinton; violated the established practice of not releasing damning information about people without filing charges; and publicly disclosed the reopening of a non-public investigation.

After an 18-month investigation, the report by Inspector General Michael Horowitz fully substantiates all of Rosenstein’s charges and, for the first time, provides an official and independent account of the circumstances surrounding Comey’s curious decisions during the 2016 presidential election.

The independent verification by the IG is significant because Comey’s firing led to the appointment of special counsel Robert Mueller, who has been investigating, in part, whether Trump obstructed justice by firing Comey.

“This IG Report makes it clear, as did Rod Rosenstein’s memo, that Trump was absolutely justified, unquestionably justified, in firing Jim Comey. So I think the Mueller Investigation is on pretty weak grounds right now,” Trump wrote on Twitter on June 17 quoting Daniel Henninger of The Wall Street Journal.

Comey made two controversial public announcements about the Clinton email case during the 2016 presidential election. On July 5, 2016, he publicly announced the exoneration of Clinton. On Oct. 28, 2016, he publicly reopened the case after more emails were discovered. Both announcements ran afoul of longstanding Department of Justice policy, the inspector general concluded.

“We concluded that Comey’s unilateral announcement was inconsistent with Department policy and violated long-standing Department practice and protocol by, among other things, criticizing Clinton’s uncharged conduct,” the inspector general’s report (pdf) states. “We also found that Comey usurped the authority of the Attorney General, and inadequately and incompletely described the legal position of Department prosecutors.”

Despite finding that Comey violated department policies at a sensitive political period, Horowitz did not find any evidence that Comey did so as a result of political bias.

Comey’s former top deputy, Andrew McCabe, was fired earlier this year as a result of findings of another report by Horowitz. The inspector general found that McCabe authorized a self-serving leak and lied about it to Comey and investigators.

On July 5, 2016, Comey announced that the FBI had concluded the investigation and that “no reasonable prosecutor” would bring charges based on the findings. The next day, Attorney General Loretta Lynch announced that the Justice Department would not file charges in the case. Comey’s announcement violated the clear separation between the FBI and the Justice Department, which holds that the bureau is tasked with investigating crimes and the department decides whether or not to bring charges or to make that decision public.

The IG report revealed for the first time that in addition to overstepping his bounds, Comey also admitted that he concealed from his bosses his intention to make the public exoneration statement.

“We found that it was extraordinary and insubordinate for Comey to conceal his intentions from his superiors, the Attorney General and Deputy Attorney General, for the admitted purpose of preventing them from telling him not to make the statement, and to instruct his subordinates in the FBI to do the same,” the report states.

“Comey waited until the morning of his press conference to inform Lynch and Yates of his plans to hold one without them, and did so only after first notifying the press. As a result, Lynch’s office learned about Comey’s plans via press inquiries rather than from Comey,” the IG report continues. “Moreover, when Comey spoke with Lynch he did not tell her what he intended to say in his statement.”

Comey also broke with department policy by publicly “trashing” Clinton without bringing charges, the report found. Several Justice Department witness also told the inspector general’s investigators that Comey’s presentation of the facts in his statement was “very skewed” or delivered with a “slant.”

Both of these key findings by the IG about Comey’s July 5, 2016, announcement are in line with what Rosenstein wrote to Trump in his recommendation to fire Comey more than a year prior.

Comey “announced his own conclusions about the nation’s most sensitive criminal investigation, without the authorization of duly appointed Justice Department leaders,” Rosenstein wrote to Trump on May 9, 2017. “Compounding the error, the Director ignored another longstanding principle: We do not hold press conferences to release derogatory information about the subject of a declined criminal investigation.”

On Oct. 28, 2016, Comey sent a letter to Congress informing lawmakers that he was reopening the Clinton email probe after being informed the day prior that the FBI has discovered “emails that appear to be pertinent to the investigation.” The letter quickly made it to the media and became one of the biggest stories of the election.

One month before Comey sent the letter, FBI agents in New York discovered a trove of over 300,000 Clinton emails in the course of an investigation of former Rep. Anthony Weiner’s communications with an underage girl, “some of which were from domains associated with Clinton,” according to the IG report. Weiner is the husband of top Clinton-aide Huma Abedin. The New York agents informed a large group of superiors on the day after the discovery.

Comey was aware that the FBI had an unwritten policy of not announcing investigations that could impact the outcome of an election within 60 days of election day, but still made the call to announce the reopening of the probe. Comey also departed from standard procedure wherein the Justice Department and the FBI consistently decline to comment on ongoing investigations.

This finding is also in line with Rosenstein’s recommendation to Trump a year ago.

“When federal agents and prosecutors quietly open a criminal investigation, we are not concealing anything,” Rosenstein wrote. “We are simply following the longstanding policy that we refrain from publicizing non-public information.”

Comey had described his choice in making the announcement a one between “two doors,” one labeled “speak” and the other “conceal.” The IG report concluded that since Comey knew of the department policies on the matter, his explanation was “a false dichotomy.”

In a hard-to-believe detail revealed in the report, Comey also told investigators that he did not know that Weiner was Abedin’s husband. Besides being the top aide to America’s top diplomat, Abedin regularly appeared on the pages of tabloid newspapers and on television because of Weiner’s many embarrassing transgressions. 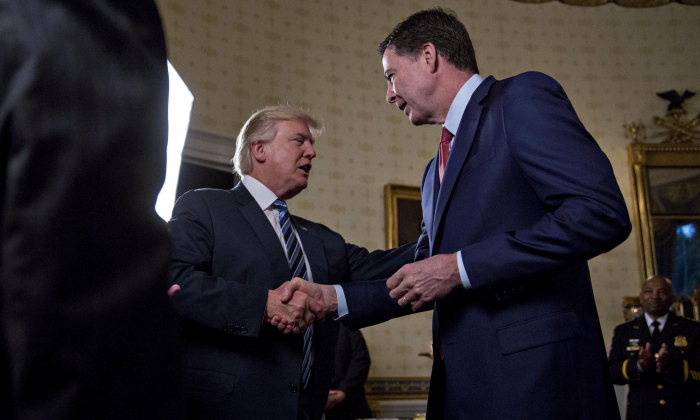