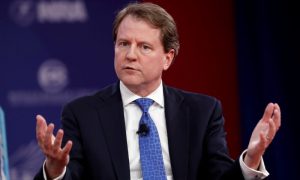 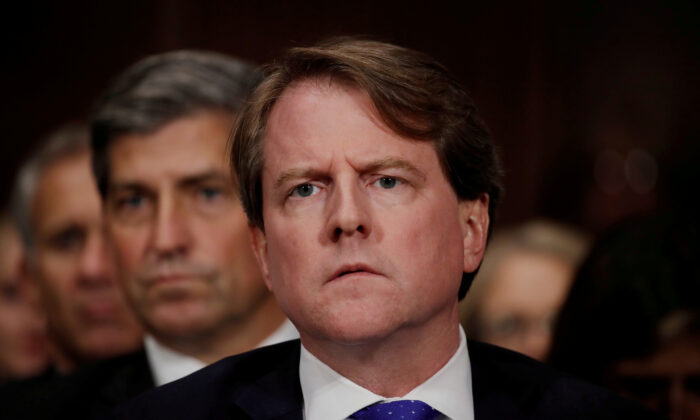 The Justice Department (DOJ) has said it will be appealing a federal court decision to require former White House counsel Don McGahn to testify before the House Judiciary Committee.

U.S. District Judge Ketanji Brown Jackson rejected the White House’s “absolute immunity” argument to prevent McGahn from appearing to testifying, saying that McGahn is required to appear before the House Judiciary Committee for testimony but is allowed to assert privilege on questions asked during a hearing, where appropriate.

“This Court holds that individuals who have been subpoenaed for testimony by an authorized committee of Congress must appear for testimony in response to that subpoena—i.e., they cannot ignore or defy congressional compulsory process, by order of the President or otherwise,” Jackson, an Obama appointee, wrote in her opinion.

The Monday ruling is widely viewed as a setback for President Donald Trump who has been resisting House Democrat’s efforts to subpoena aides and members of the executive branch from testifying before Congress as part of a slew of investigations aimed at finding information to impeach Trump. The White House was also closely watching this case as the administration has used the same “absolutely immunity” argument to prevent potential witnesses from testifying in the House impeachment inquiry.

Meanwhile, William Burck, a lawyer for McGahn, said in a statement that his client will comply with Jackson’s decision unless it is stayed pending appeal.

White House Counsel Pat Cipollone wrote a letter to House Judiciary Committee Chairman Jerrold Nadler (D-N.Y.) back in May saying that they had provided McGahn with the documents in connection with the Mueller investigation “with the clear understanding that the records remain subject to the control of the White House for all purposes.”

During her ruling, Jackson said whether an official withholds documents requested by a congressional committee citing executive privilege is a separate question to whether they expected to appear for testimony. She added that executive branch officials are “not absolutely immune” from the compulsory congressional process even if the president expressly directs the officials’ non-compliance.

“This Court adds that this conclusion is inescapable precisely because compulsory appearance by dint of a subpoena is a legal construct, not a political one, and per the Constitution, no one is above the law,” Jackson wrote.

“That is to say, however busy or essential a presidential aide might be, and whatever their proximity to sensitive domestic and national-security projects, the president does not have the power to excuse him or her from taking an action that the law requires,” she added.

Nadler said that he now expects McGahn to “follow his legal obligations and promptly appear before the Committee.”

“Don McGahn is a central witness to allegations that President Trump obstructed Special Counsel Mueller’s investigation, and the Administration’s claim that officials can claim ‘absolute immunity’ from Congressional subpoenas has no basis in law, as the court recognized today,” Nadler said in a statement on Twitter.

This comes hours after House Intelligence Committee Chairman Adam Schiff (D-Calif.) said that his committee has started to draft a report in the impeachment inquiry and would hand over the authority of the probe to the House Judiciary Committee.

Schiff reacted to the McGahn ruling saying that the courts have made it clear “that absolute immunity is not a legitimate basis by which to prohibit senior White House officials from testifying before Congress,” according to a statement to media outlets.