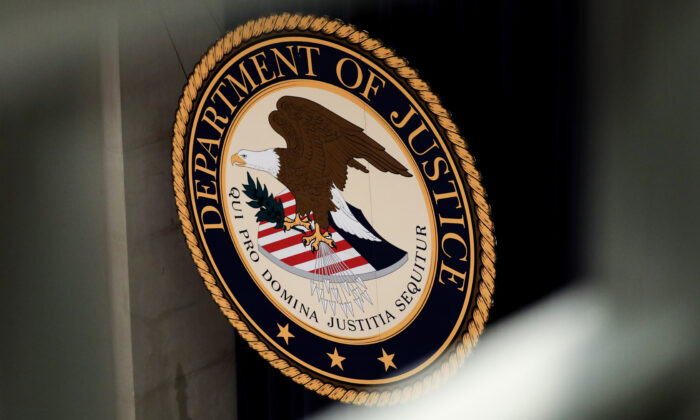 The Department of Justice in Washington on Jan. 14, 2020. (Samira Bouaou/The Epoch Times)
US News

This comes after Attorney General William Barr confirmed on Feb. 10 that the DOJ had “established an intake process” to review any Ukraine-related information submitted by individuals, in order to assess its source and credibility. His comments were made in response to questions about whether the department was receiving information on matters about Ukraine from President Donald Trump’s personal attorney Rudy Giuliani.

Sen. Lindsey Graham (R-S.C.), chairman of the Senate Judiciary Committee, told CBS’s “Face the Nation” the day before that the DOJ has created a process to allow Giuliani to submit information he has collected in Ukraine about former Vice President Joe Biden and his son Hunter Biden so that the material can be vetted.

Following Barr’s remarks, Nadler sent a letter to the attorney general demanding answers as to why the department was receiving information outside its established channels (pdf). Nadler also accused Barr of misrepresenting past comments by saying he hadn’t discussed Ukraine matters with Giuliani.

On Feb. 18, assistant Attorney General Stephen Boyd responded to Nadler’s request with his letter. Boyd stated that the process, which was initially handled by multiple U.S. attorney offices or department components, had been centralized and was being coordinated by the U.S. attorney for the Eastern District of New York, Richard Donoghue. He added that U.S. attorney for the Western District of Pennsylvania, Scott Brady, has also been assigned to assist in the receipt, processing, and reviewing of any information submitted by the public about matters related to Ukraine.

Boyd said the move to centralize the intake process was made in an attempt to avoid duplication of effort across different department offices, to facilitate information sharing, and to prevent conflicts of potentially overlapping matters.

Barr faced intense scrutiny following his confirmation that the DOJ had established a process to accept information about Ukraine, including information from Giuliani. Several lawmakers expressed concern over the move to accept the information and summoned the attorney general for testimony before the House Judiciary Committee on March 31.

Barr said during a press conference on Feb. 10 that the DOJ has the obligation to “have an open door to anybody who wishes to provide us information that they think is relevant,” while adding that the department would treat any information about Ukraine with caution.

“And for that reason, we had established an intake process in the field, so that any information coming in about Ukraine could be carefully scrutinized by the department and its intelligence community partners so that we could assess its provenance and its credibility. And you know, that is true for all information that comes to the department relating to the Ukraine, including anything Mr. Giuliani might provide.”

In his letter, Boyd reiterated the attorney general’s position, saying that the department’s move to provide for the receipt of the information “does not circumvent the department’s established channel,” adding that the DOJ regularly assigns attorneys to coordinate or focus on particular matters. He added that the process doesn’t grant anyone “unique access” to the department.

“Any individual who makes use of this process will be treated just like anyone else who brings information to the department’s attention,” he wrote.

He added that the information would be vetted and that the department is vigilant against the “significant threat of disinformation.”