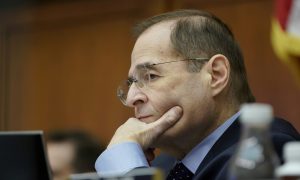 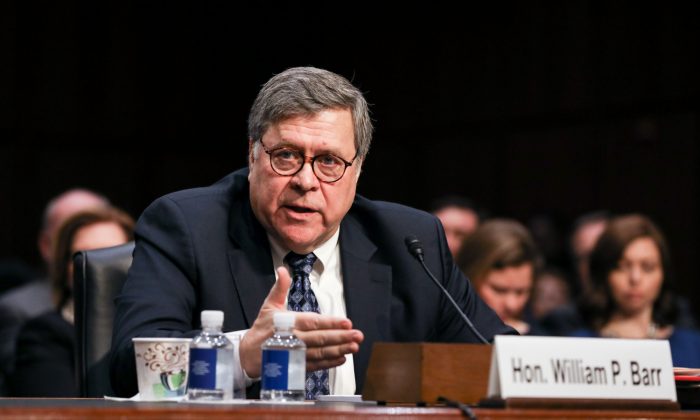 Attorney General nominee William Barr testifies on the first day of his confirmation hearing in front of the Senate Judiciary Committee at the Capitol in Wash., on Jan. 15, 2019. (Charlotte Cuthbertson/The Epoch Times)
Trump Administration

The Department of Justice (DOJ) made an accommodation for Democrats on the House Judiciary Committee on June 10 by agreeing to begin releasing underlying evidence for the final report by special counsel Robert Mueller.

House Judiciary Committee Chairman Jerry Nadler (D-N.Y.) said in a statement that he would hold back further contempt proceedings against Attorney General William Barr while the DOJ continues to cooperate.

The House of Representatives was scheduled to vote on June 11 about whether to hold Barr in contempt for defying Nadler’s subpoena for the fully unredacted Mueller report and the underlying documents. It’s unclear if the Democrats still plan to proceed.

Upon releasing the redacted Mueller report, Barr offered a handful of lawmakers, including Nadler, a chance to view a minimally redacted version of the report. The Justice Department has reached a separate deal with the Democrats on the House Intelligence Committee to provide underlying foreign intelligence and counterintelligence documents.

Nadler issued a subpoena for the full report shortly after Barr released the report in April. Barr refused to comply, pointing out, in part, that disclosing grand jury information would be illegal.

In response, Democrats on the Judiciary Committee voted to recommend that the full House hold Barr in contempt of Congress. Barr then asked President Donald Trump to assert executive privilege over the entire report. Trump complied with Barr’s request.

Nadler said the committee would begin receiving documents on June 10. The documents represent the underlying evidence for the second volume of Mueller’s report, which dealt with the investigation into alleged obstruction of justice by Trump.

Nadler noted in the statement that he expects ongoing cooperation from the DOJ to hold off further contempt proceedings against Barr.

“If the Department proceeds in good faith and we are able to obtain everything that we need, then there will be no need to take further steps,” Nadler said. “If important information is held back, then we will have no choice but to enforce our subpoena in court and consider other remedies.”

The contempt resolution before the House also includes former White House counsel Don McGahn. The White House has asserted executive privilege and asked McGahn to not testify before the committee.

Democrats accuse the White House of “stonewalling” their investigations. Republicans accuse the Democrats of abusing congressional subpoena powers to target the president in order to score political points for the 2020 election.

In addition to not bringing an obstruction charge, Mueller was unable to find evidence to establish that Trump colluded with Russia to influence the 2016 presidential election. Three separate committee investigations in the House and Senate reached the same conclusion.