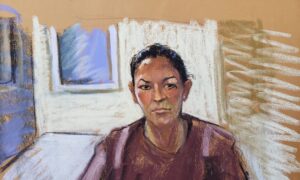 A Justice Department investigation found that federal prosecutors who oversaw a controversial non-prosecution deal with Jeffrey Epstein in 2008 exercised “poor judgment” but did not commit “professional misconduct,” according to a report released Nov. 12.

The investigation by the department’s Office of Professional Responsibility reviewed the conduct of former federal prosecutors, including Alex Acosta, Donald Trump’s former labor secretary, who oversaw a controversial plea deal—also known as a “sweetheart deal” with him in 2008.

The deal came after the financier was accused in 2007 of operating an international child sex ring at his Palm Beach mansion and 72-acre private island estate in the Caribbean, Little St. James Island, and molesting more than 100 underage girls over eight years.

It saw him avoid a possible life sentence, and instead serve just 13 months in a private section of Florida’s Palm Beach County jail. Epstein, then 54, pleaded guilty to lesser state charges—only two felony prostitution charges in state court, rather than federal court. He also paid financial settlements to victims, registered as a sex offender, and gave undisclosed information to authorities.

Per the agreement, Epstein was afforded a work-release program that allowed him to leave the jail for 12 hours each day, six days a week, and work unsupervised at his downtown West Palm Beach office.

In a 13-page executive summary of the investigation’s findings, the Office of Professional Responsibility said, “OPR concludes that the subjects did not commit professional misconduct with respect to the development, negotiation, and approval of the NPA.” It continues, “OPR found no clear and unambiguous standard that required Acosta to indict Epstein on federal charges or that prohibited his decision to defer prosecution to the state. Furthermore, none of the individual terms of the NPA violated Department or other applicable standards.”

There was also “no evidence” that Acosta’s decision to pursue the deal with Epstein “was based on corruption or other impermissible considerations, such as Epstein’s wealth, status, or associations,” the office said in its report summary.

However, the report did fault Acosta for his lack of sensitivity towards the feelings of Epstein’s victims by failing to alert them to the terms of the NPA and making sure they had adequate notice of Epstein’s guilty plea to the state charge.

“Victims were not treated with the forthrightness and sensitivity expected by the Department,” the Office of Professional Responsibility said, which it noted, “presented a glaring contrast with Acosta’s responsiveness to the demands of Epstein’s attorneys, which included the unusual courtesy of allowing them to preview and respond to (federal prosecutors’) draft victim notifications.”

Acosta resigned as labor secretary after Epstein was arrested under separate new charges in July 2019.

Sen. Ben Sasse (R-Neb.), the Chairman of the Senate Judiciary Oversight Subcommittee, has pushed the Department of Justice to investigate the sweetheart deal that Epstein received since 2018, and in February 2019, at Sasse’s insistence, the DOJ opened an investigation into its handling of Epstein.

On Nov. 12, following the completion of the DOJ’s investigation, Sasse said in a statement, “Letting a well-connected billionaire get away with child rape and international sex trafficking isn’t ‘poor judgment’—it is a disgusting failure. Americans ought to be enraged.

“Jeffrey Epstein should be rotting behind bars today, but the Justice Department failed Epstein’s victims at every turn. The DOJ’s crooked deal with Epstein effectively shut down investigations into his child sex trafficking ring and protected his co-conspirators in other states. Justice has not been served. The full report needs to be released to the public. OPR might have finished its report, but we have an obligation to make sure this never happens again.”

Epstein was later charged by federal prosecutors in Manhattan for similar allegations in 2019. He was found dead in his cell on Aug. 10, 2019, after committing suicide while in federal custody as he awaited trial.