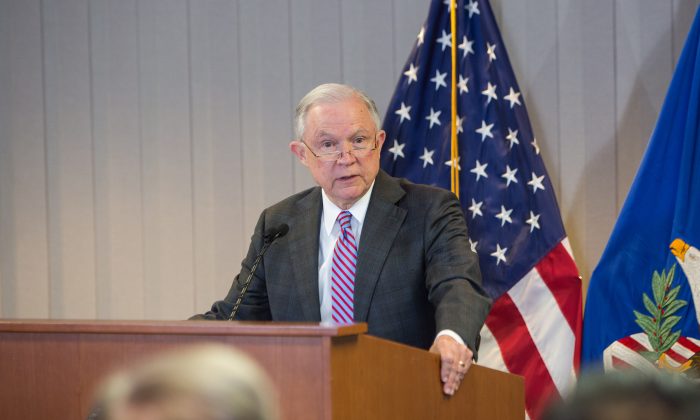 WASHINGTON—Five men who became U.S. citizens around the turn of the century are child sex abusers who the Justice Department is trying to strip of their citizenship.

The department on Nov. 21 filed lawsuits against all five men—three are natives of Mexico, one of Colombia, and one of Nigeria—saying they committed fraud by concealing the sexual abuse during the naturalization process. The men committed crimes of sexual abuse of minor victims prior to naturalizing, the Justice Department said.

Attorney General Jeff Sessions said the fraud is “a betrayal of the American people’s generosity.”

“It is especially appalling when it also involves the sexual abuse of children. The Department of Justice has a duty to prosecute these crimes vigorously, particularly so for individuals who commit fraud in the naturalization process,” Sessions said.

Under the Immigration and Nationality Act, the citizenship of a naturalized U.S. citizen may be revoked if it was illegally procured, or procured by concealment of a material fact or by willful misrepresentation.

Other ways a naturalized U.S. citizen can become denaturalized and deported include refusal to testify before Congress, a dishonorable discharge from the military before serving five years, or membership in a subversive group (such as the Nazi Party or al-Qaeda) within five years of being naturalized.

A person applying for naturalization must prove they are a person of “good moral character,” according to the U.S. Citizenship and Immigration Services website. This includes not committing a crime against a person with intent to harm.

The Justice Department provided the following information about the five men, who were living in Florida, Illinois, and Texas:

Jorge Luis Alvarado, 56, a native of Mexico, was naturalized on March 9, 2000. Shortly before filing his naturalization application, Alvarado made unlawful sexual contact with a 16-year-old child. In March 2007, he pleaded guilty in Texas state court to committing indecency with a child by sexual contact, a second-degree felony. Alvarado was ordered to community supervision and to register as a sex offender. He has been residing in southern Texas.

Eleazar Corral Valenzuela, 49, a native of Mexico, was naturalized on June 15, 2000. Prior to applying to naturalize, he sexually abused a minor child. In November 2000, after his naturalization, Corral pleaded guilty in Illinois state court to aggravated criminal sexual abuse, a Class 2 felony. He was ordered to register as a sex offender. He has been residing in Aurora, Illinois.

Emmanuel Olugbenga Omopariola, 60, a native of Nigeria, naturalized on July 1, 2004. Before he filed his naturalization application in May 2003, Omopariola made unlawful sexual contact with a 7-year-old child. In 2015, after he was naturalized, Omopariola pleaded guilty in Texas state court to indecency with a child–sexual contact, a second-degree felony. He was ordered to undergo five years of community supervision and placed on the sex offender registry. He has been residing in Grand Prairie, Texas.