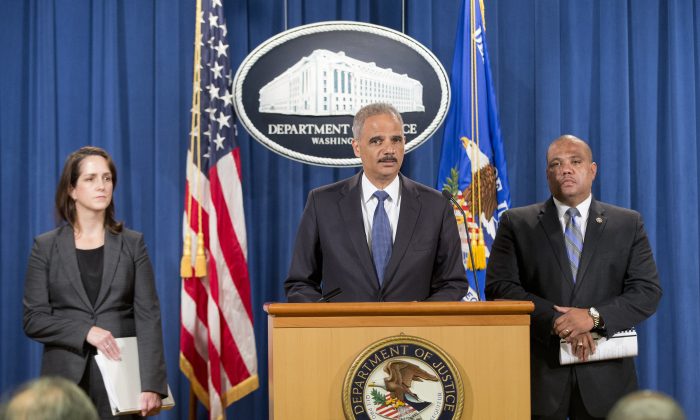 Separate from investigation into Michael Brown's death
By Genevieve Belmaker

The U.S. Justice Department launched an investigation into the practices of the Ferguson, Missouri police department on Thursday. U.S. Attorney General Eric Holder said during a live televised press conference that the investigation is part of a “long-term strategy” to “change the way law enforcement leaders make decisions.”

The investigation follows the August shooting of an 18-year-old unarmed African American man, Michael Brown, by Ferguson police officer Darren Wilson. Two weeks ago, Holder visited Ferguson, met with Brown’s parents, and heard complaints from the community of mistrust between the public and the police.

“The decision to go ahead was based not only on what I heard when I was out there—which was fairly compelling—a lot of traffic stops, a lot of revenue raising related to traffic stops,” said Holder during the press conference. “I don’t think there’s any question that there’s a basis.”

Holder also said that during his visit to Ferguson, he made it clear that something would be done about what he described as a “pattern of practice” which targets minority groups.

“I promised that the United States Department of Justice would continue to stand with the people there,” he said.

Thursday’s announcement is only the start of an investigation. A key goal will be to dialogue with the Ferguson police department and turn that talk into specific action. The Justice Department did say that they reserve the right to expand the investigation.

A similar investigation into a Las Vegas police department in 2012 resulted in a review with 75 findings related to shootings and use of force issues and recommendations from the DOJ, most of which have since been adopted.

The new investigation is in addition to an ongoing federal civil rights investigation into the circumstances of the Aug. 9 shooting of Brown. A local grand jury is also looking into the shooting.

Brown’s death sparked nearly two weeks of rioting, protesting, looting, and unrest in Ferguson, even delaying the beginning of the new school year. It led to protests across the U.S. in many major cities and started an ongoing national discussion about how the police in America treat minorities.

Holder has promised “a fair, thorough investigation,” but did not indicate how long it might take. The DOJ, whose Community Oriented Policing Services unit has already been in Ferguson for several weeks, said it will work with the Ferguson Police Department and local civic leaders.


Project 21, sponsored by the National Center for Public Policy Research, a conservative think tank, issued a statement Thursday about Holder’s announcement. “I believe the fact that the Justice Department is planning to open this investigation signals they do not believe there is a strong case against Officer Wilson and that a grand jury will probably not bring down an indictment against him,” stated Project 21’s Christopher Arps, a St. Louis resident.