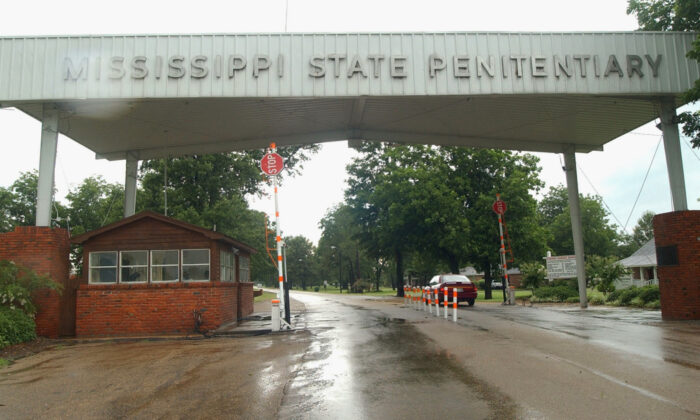 The entrance to the Mississippi State Penitentiary at Parchman, Miss., in a file photo. The Justice Department has opened a civil rights investigation into the Mississippi prison system after a string of inmate deaths in the past few months, officials said on Feb. 5, 2020. (Rogelio Solis, File/AP Photo)
By Isabel van Brugen

The Justice Department has opened a civil rights investigation into the conditions at Mississippi state prisons after a string of inmate deaths in the past few months.

Federal prosecutors from the department’s Civil Rights Division will work to determine whether state corrections officials are adequately protecting prisoners from physical harm and whether there are adequate health care and suicide prevention services in place.

The facilities under investigation are where the majority of deaths have occurred. Some deaths were suicides, while others were killed during confrontations between inmates.

“It is time for the federal government to step in and do what the Mississippi Department of Corrections has failed to: end the violence and ensure humane living conditions,” the deputy legal director for Southern Poverty Law Center, Lisa Graybill, said in a statement Wednesday.

“Dozens have died and hundreds of others live in squalid conditions with standing sewage in freezing temperatures as a result of … Mississippi’s neglect. Mississippi’s prisons are overcrowded, understaffed, and aren’t safe for anyone,” she said.

Rising violence in Mississippi state prisons and increasingly dangerous working environments in recent years have left the state Department of Corrections struggling to find people to work as guards in the facilities.

Last month, Phil Bryant, Mississippi’s outgoing governor, said gangs operating inside the prison system are to blame for the increasing violence, saying prisons are difficult to manage “under the best of circumstances.”

Others, however, have said it is the state’s responsibility to keep prisoners safe.

The Mississippi State Penitentiary at Parchman—one of the prisons under investigation—has a longstanding record of poor health department inspections. Inspections have shown sanitation issues in kitchens, cells with broken sinks, toilets, and holes in walls, and widespread mold and mildew in showers.

Entertainment mogul Jay-Z and rapper Yo Gotti are paying attorneys who are suing the state on behalf of inmates over conditions in the prisons. The lawsuit filed in mid-January says the prisons are “plagued by violence” and inmates are forced to live in decrepit and dangerous conditions.

Yo Gotti told CBS News in a statement the lawsuit will still be moving forward, but that he was “encouraged” by news of the investigation.

“We’re hopeful their findings will lead to statewide reforms to these facilities. However, until we receive tangible commitments to shut these prisons down and move inmates to safer facilities, we will proceed with our lawsuit.”