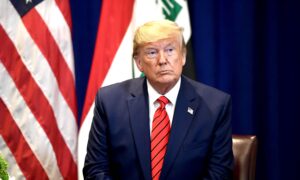 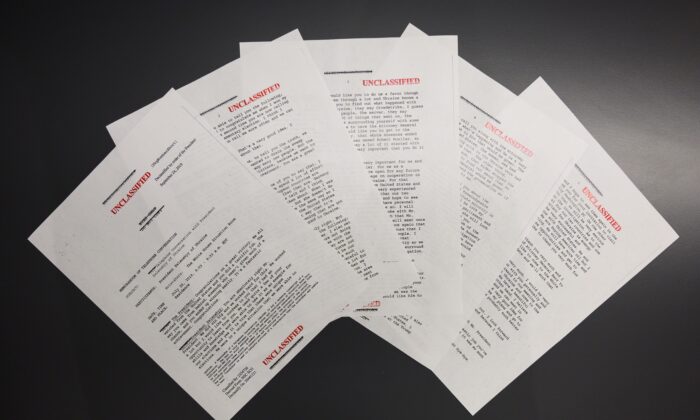 The declassified phone transcript, released by the White House, of a conversation between U.S. President Donald Trump and Ukrainian President Volodymyr Zelenskyy from July 25, 2019 is seen in this photo illustration in Washington on Sept. 25, 2019. The White House released a call transcript Wednesday confirming Donald Trump asked his Ukrainian counterpart to probe his political rival Joe Biden, a day after Democrats seized on the allegation to launch an impeachment process. (Andrew Caballero-Reynolds/AFP/Getty Images)
Trump Administration

The Department of Justice (DOJ) determined that President Donald Trump did not violate campaign finance law when he asked Ukrainian President Volodymyr Zelensky to investigate allegations of corruption by former vice president Joe Biden and his son, Hunter Biden.

The DOJ made the revelation in a statement following the release of a transcript of the call, during which Trump asked Zelensky to look into the firing of a top Ukrainian prosecutor which allegedly occurred under pressure from Biden. The prosecutor was reportedly investigating the company on which Hunter Biden served as a board director.

The Justice Department received a referral about the call referencing a letter from the Intelligence Community Inspector General addressed to the Director of National Intelligence (DNI). The letter cited the conversation between Trump and Zelensky as a potential violation of campaign finance law. The letter acknowledged that neither the complainant nor the DNI had firsthand knowledge of the call.

The transcript of the call shows that Trump did not exert pressure or offer any repayment when he asked Zelensky to look into Biden and his son. Trump told Zelensky that he will have Attorney General William Barr and Rudy Giuliani contact the Ukrainian leader. The Justice Department clarified that Trump did not speak to Barr “about having Ukraine investigate anything relating to former Vice President Biden or his son.”

Kupec added that U.S. Attorney John Durham is probing the extent to which several countries, including Ukraine, contributed to the counterintelligence investigation of the Trump campaign. Barr did not contact Ukraine regarding Durham’s inquiry, but Durham has received information from private Ukrainians who are not members of the Ukrainian government. Durham is evaluating the information, according to the DOJ.

The allegations surrounding the call between Trump and Zelensky led to House Speaker Nancy Pelosi (D-Calif.) to formally launch an impeachment inquiry of Trump. Pelosi launched the inquiry before seeing the transcript and before reviewing a copy of the whistleblower complaint.

Addressing a question about the call on Sept. 25, Trump told reporters that he did not exert pressure on Zelensky.

“The way you had that built up, that call, it was going to be the call from hell. It turned out to be a nothing call, other than a lot of people said ‘I never knew you could be so nice,’” Trump said.