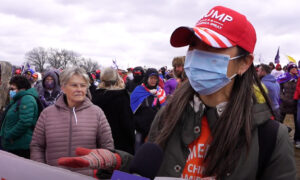 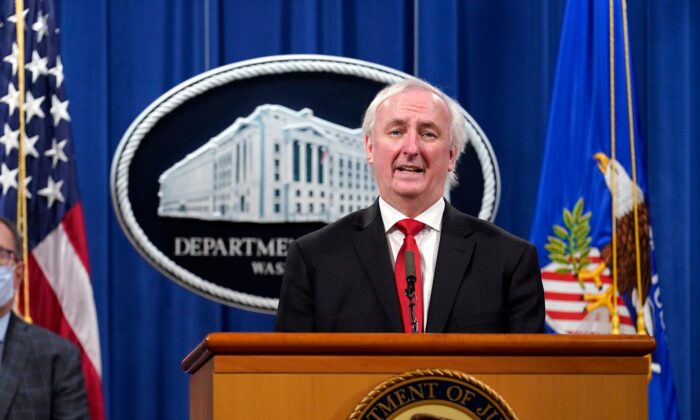 Acting Attorney General Jeffrey Rosen on Wednesday evening condemned the acts of violence that occurred on U.S. Capitol grounds during a demonstration over concerns about election integrity.

“The violence at our Nation’s Capitol Building is an intolerable attack on a fundamental institution of our democracy,” Rosen said in a statement.

A subgroup of protesters breached the Capitol building after breaking windows to enter as members of Congress were sitting during a joint session to count Electoral College votes. The unrest forced members of Congress, who were debating on whether to certify certain votes, to suspend their session.

In a struggle to get control of the situation, police began evacuating some congressional office buildings due to “police activity.” Some of these buildings include the Cannon House Office Building and the building that houses the Library of Congress. Lawmakers were also evacuated from the building, while some were told to shelter in place in their office.

At one stage, the officials declared that the congressional buildings had been secured after deploying tear gas and percussion grenades in an attempt to disperse protesters from the grounds of the U.S. Capitol. A curfew in the city set by the mayor began at 6 p.m on Jan. 6 and will end at 6 a.m. on Jan. 7.

President Donald Trump had called for peace and urged the protesters to go home.

“You have to go home now. We have to have peace. We have to have law and order and great people in law [enforcement],” Trump said in a video address, which was not allowed to be shared or liked on Twitter, despite Trump calling for non-violence.

Twitter and Facebook have since removed that video, claiming that they violated their policies. Twitter also announced that they had locked the president’s account for 12 hours following the removal of the Twitter posts. It added that it would “permanently” suspend Trump’s account if the president continued to “violate” its Civic Integrity or Violent Threats policies.

Twitter vid of President Trump telling folks to go home not viewable on Desktop anymore, but still available on phone apps-for now. Here it is again: #DCProtests #Capitol Facebook has taken the video down on its platform. pic.twitter.com/M9ofL12Wrx

The violence has also been condemned by Democratic presidential candidate Joe Biden, who characterized it as an “insurrection” that was “bordering on sedition.”

Press Secretary Kaleigh McEnany previously said in a statement that the president has authorized the National Guard to go to the U.S. Capitol to assist with the law enforcement efforts.

Later on Wednesday, House Speaker Nancy Pelosi (D-Calif.) announced that the House will proceed at the Capitol in the electoral certification.

“In consultation with Leader Hoyer and Whip Clyburn and after calls to the Pentagon, the Justice Department and the Vice President, we have decided we should proceed tonight at the Capitol once it is cleared for use,” Pelosi said in a statement on Wednesday night, referring to Reps. Steny Hoyer (D-Md.) and Jim Clyburn (D-S.C.).

She added that “we always knew this responsibility would take us into the night,” adding that members of Congress and staff “should remain on the Capitol complex until they are notified by the United States Capitol Police.”

Lawmakers from both sides of the aisle have also condemned the violence from a subset of protesters, with House Minority Leader Kevin McCarthy (R-Calif.) calling it “un-American.”

It’s unclear whether House GOP representatives and senators will continue their plan to object to the electoral counting efforts. Before the House and Senate chambers were evacuated and put into lockdown, lawmakers were deliberating on the electoral votes for Arizona.