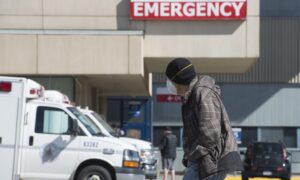 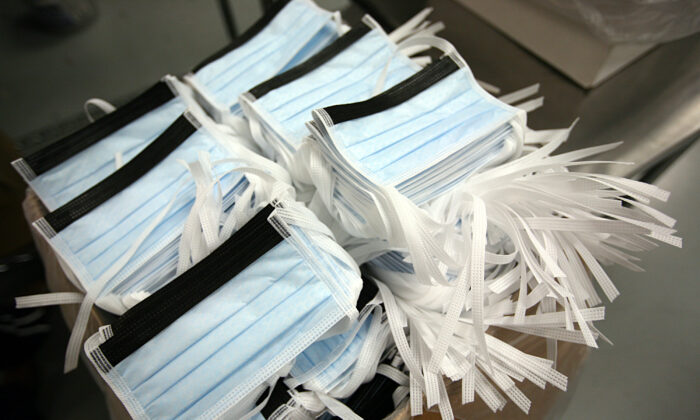 Disposable surgical masks are packed in boxes at Prestige Ameritech in Richland Hills, Texas, on May 3, 2009. (Tom Pennington/Getty Images)
US News

Federal prosecutors have charged a New York businessman with hoarding personal protective equipment (PPE) and reselling those items at price levels much higher than what is deemed fair and reasonable.

The Justice Department announced on Friday that it had filed a criminal complaint against Amardeep Singh, also known as Bobby Singh, in a federal court for allegedly violating the Defense Production Act (DPA), which prohibits the accumulation of medical supplies and devices designated by Department of Health and Human Services (HHS) Secretary Alex Azar as scarce with the purpose to hoard them or sell them for exorbitant prices. The prosecutors say this is the first hoarding and price gouging case brought under this law across the country.

The charges come about a month after President Donald Trump signed an executive order to prevent the price gouging and hoarding of “critical resources” used to combat the CCP (Chinese Communist Party) virus. The order was made under the DPA and directs Azar to designate items as scarce.

Singh’s lawyer, Bradley Gerstman, described the charges as “unconscionable and unsustainable,” adding that his client looks forward to fighting the charges in court.

“Nobody in their right mind would believe that they could be held criminally responsible for selling PPE products,” Gerstman told The Epoch Times. “[The Defense Production Act] is vague at best in terms of what the elements of the crime actually are. So I don’t believe that this law could be sustained under any federal court and in the United States.”

The complaint alleges that Singh, who operates retail entities selling sneakers and apparel, dedicated a new section in his store at Plainview, New York, for “COVID-19 essentials.” There he began selling to the public items that have been designated as scarce under Azar’s designation at excessive prices, prosecutors alleged. These items include N-95 filtering facepiece respirators, protective masks, surgical masks, face shields, medical gowns, and disinfecting products.

Prosecutors say Singh was also selling the items at high markups to vulnerable groups in the community such as to the Association to Benefit Children, the New York Foundation for Senior Citizens, and Rewarding Environments for Adult Living.

Singh continued to engage in the conduct, prosecutors alleged, despite receiving cautionary measures by New York State authorities, including a cease-and-desist letter to one of Singh’s entities suggesting that he may be violating New York’s price-gouging statute.

“As charged in the complaint, Singh’s amassing of critical personal protective equipment during a public health crisis and reselling at huge markups places him squarely in the cross-hairs of law enforcement armed with the Defense Production Act,” Richard Donoghue, U.S. Attorney for the Eastern District of New York, said in a statement. “This Office is working tirelessly in coordination with the COVID-19 Hoarding and Price Gouging Task Force to prevent a pandemic of greed by profiteers.”

Gerstman denied the allegations saying that his client “never gouged anybody.”

“My client looks forward to fighting those allegations, showing the true cost of inventory, and be able to prove that he only benefited from a very reasonable markup in all the products that were described in the complaint,” he said.

He added that his client had also donated a significant amount of those items for free including to local charities, local like law enforcement, local fire departments in Long Island, and Northwell Hospital.

Attorney General William Barr directed each U.S. attorney general office and relevant department component in a memo to designate an experienced attorney to serve as a member of the task force.

“While this crisis has brought out the best in most Americans, there appear to be a few unfortunate exceptions,” Barr wrote in his memo. “We will not tolerate bad actors who treat the crisis as an opportunity to get rich quick.