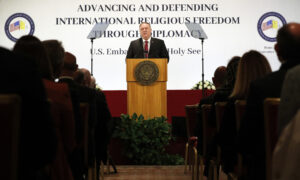 The Department of Justice (DOJ) has backed the Capitol Hill Baptist Church in its efforts to hold larger outdoor worship services in Washington, D.C., where authorities have denied requests for the congregation to exceed the 100-person limit imposed under CCP virus restrictions while tolerating protests that violate the 50-person cap on mass gatherings.

Arguing that the Constitution protects religious freedom to the same extent as the right to protest, the DOJ on Friday filed a statement of interest in a federal court in Washington, arguing that D.C. authorities should “accommodate Capitol Hill Baptist Church’s effort to hold worship services outdoors, at least to the same extent the District of Columbia allows other forms of outdoor First Amendment activity, such as peaceful protests.”

The statement of interest was filed in a case in which Capitol Hill Baptist Church sued D.C. Mayor Muriel Bowser, alleging that the constitutional rights of congregants have been violated by Bowser’s allowing mass protests, while denying the church’s request for its 850-plus congregation to meet as a complete body for worship each Sunday.

“The church takes no issue with defendants’ decision to permit these gatherings, which are themselves protected by the First Amendment, and the church supports this exercise of First Amendment rights. The church does, however, take exception to defendants’ decision to favor certain expressive gatherings over others,” states the lawsuit, filed on Sept. 22. “The First Amendment protects both mass protests and religious worship. But Mayor Bowser, by her own admission, has preferred the former over the latter.”

The lawsuit does not challenge the city’s limits on places of worship in general, which may operate indoors or outdoors at a capacity not to exceed 100 persons, but seeks permission via waiver to meet outdoors in a larger group, arguing that “a weekly in-person worship gathering of the entire congregation is a religious conviction for which there is no substitute” and adding that it does not offer virtual services, which Bowser’s executive order recommends.

The suit claims city authorities have been “discriminatory in their application of the ban on large scale gatherings,” citing an appearance of Bowser at a June rally attended by tens of thousands of people. The executive order imposes a 50-person limit on mass gatherings, which can be waived if approved by authorities.

The Justice Department said there is no legal basis for allowing mass protests while disallowing religious worship.

“The right to free exercise of religion and the right to protest are both enshrined in the First Amendment of the Constitution. We are a nation dedicated to freedom of conscience and freedom of expression. The District of Columbia has, unfortunately, neglected these rights,” said Eric Dreiband, assistant attorney general for the Civil Rights Division, in a statement. “The Department of Justice is committed to defending both of these fundamental freedoms and in supporting all Americans’ rights to worship as they choose.”

The Epoch Times did not immediately receive a response from Bowser’s office regarding the matter.

There have been a handful of cases around the country in which houses of worship have challenged CCP virus restrictions, including a case in Virginia in regards to which the DOJ also wrote a “statement of interest” in support of religious freedom.