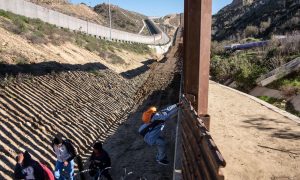 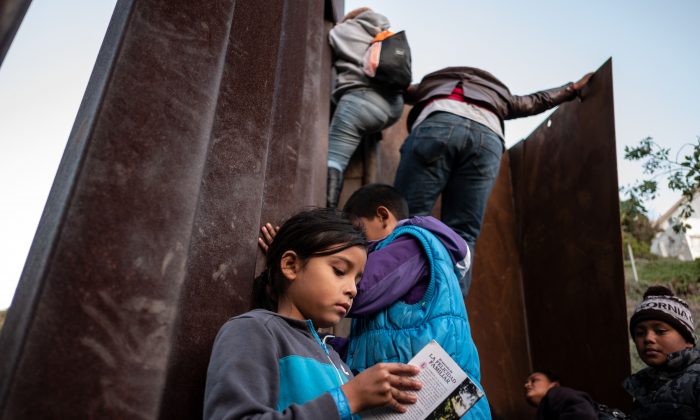 A Central American migrant girl holds a book as other migrants travelling in a caravan, climb the Mexico-US border fence in an attempt to cross to San Diego County, in Playas de Tijuana, Baja California state, Mexico on Dec. 12, 2018. (Guillermo Arias/AFP/Getty Images)
Viewpoints

Justice and Immigration: What We Owe Noncitizen Migrants

Democratic leaders are staunchly united against President Donald Trump’s strategy to build a wall across our southern border. They are far less united, however, about why they oppose it.

On the one hand, Senate Minority Leader Chuck Schumer (D-N.Y.) claims that “Democrats and the president both want stronger border security,” but he argues that building a wall will be expensive and legally difficult given eminent-domain challenges, but most tellingly, he argues that it would be ineffective. We understand him to mean that, given the current circumstances and resources, the wall would be an imprudent means to achieve an agreed-upon end, namely preventing illegal immigration.

On the other hand, House Speaker Nancy Pelosi (D-Calif.) asserts that “the fact is, a wall is an immorality.”

“It has nothing to do with politics,” she said. “It has to do with: The wall is an immorality between countries.”

We take her to mean that because border walls are effective at preventing illegal immigration, it’s evil to build them, and because it’s evil, we shouldn’t even have a conversation about it. That is to say that we do not have an agreed-upon end and, thus, discussion about various means is pointless.

Maybe they would say that a border wall is both ineffective and immoral. However, Schumer insisted not too long ago that increasing border security to prevent illegal immigration isn’t only morally acceptable but morally required. Further, he strongly praised building border fencing in the past, although now, he says there is a huge wall of difference between a border fence and a border wall.

So, when he says “we sharply disagree with the president about the most effective way” to achieve border security, are we to believe that there is a “sharp” difference between effective, morally necessary fences, and ineffective, morally evil walls? Clearly, this is nonsense and histrionic political theater.

Pelosi defended her claim that a border wall is “an immorality” by asserting that it is “an old way of thinking,” invoking a historically relative understanding of morality. To use one of President Barack Obama’s favorite tropes, Pelosi believes border walls are on “the wrong side of history” (leading one to wonder, though, if a wall is what separates these mystic sides of history).

We hold that before we can return to the important debate about the best means to achieve our ends, we must come to an agreement about what those ends are. To do that, we must first determine whether walls are actually immoral.

Now, we must consider what we owe non-citizens who aren’t legal visitors.

Furthermore, all our duties are in a hierarchy. Most people would say their highest duty is owed to God, followed by country, family, friends, etc. To deny this ranking isn’t noble and democratic, but ugly and impious. Thus, we don’t have a duty to do something for anyone that would require us to neglect a higher duty.

One’s duties are also clarified by recognizing corresponding rights. As citizens of the United States, we have a right to protection from foreign aggression, and this helps to make clear that we are duty-bound to be willing even to die for our fellow citizens in time of war.

We must recognize that those who live in the United States illegally have a right not to be left in legal limbo. This implies that we owe them a duty to deal with their illegal status by some resolution through the law. We must recognize that those who desire to immigrate to the United States have a right to not be encouraged to break our laws, by being misled about our resolve to enforce them.

It’s cruelly unjust to promote conditions that encourage someone to do something illegal that puts them and their dependent children at great risk. This implies that we owe them the duty of at least reasonably discouraging them from breaking our laws and risking their lives in the process.

As followers of a religion or simply as members of the human race, many will say they owe a duty to people outside of our borders, and so they may, but they don’t have the right to compel other citizens to shoulder that duty.

Thus—as citizens—justice requires that we honor our duties to all the people within our borders: first to our fellow citizens, then to our non-citizen visitors, and finally to the illegal population. To put this logic in the loftier language that the president recently used: We secure our borders not because we hate those on the outside, but because we love and are duty-bound to those on the inside.

Schumer himself was right in saying that “until the American people are convinced that we will stop future flows of illegal immigration, we will make no progress on dealing with the millions of illegal immigrants who are here now,” and justice here is too-long delayed.

At bottom, we suspect the disagreement over the border wall is about the ends, not the means. The current government shutdown illustrates that two people who disagree about where they are going can’t have a sensible discussion about the best way to get there.

Clifford Humphrey is originally from Warm Springs, Georgia. Currently, he is a doctoral candidate in politics at Hillsdale College in Michigan.