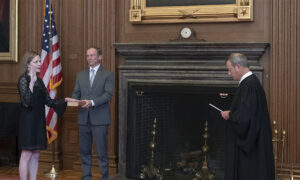 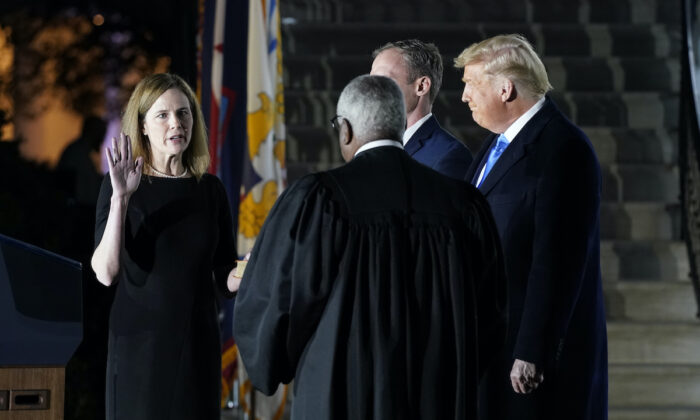 Justice Amy Coney Barrett is expected to participate in her first oral arguments on the nation’s high court since being confirmed and sworn in one week ago.

Members of the public hoping to see Barrett on the bench will be unable to due to measures implemented to contain the Chinese Communist Party (CCP) virus. The Supreme Court began hearing cases by phone since May and scheduled telephonic hearings for the rest of the year. Court-watchers can still hear Barrett when she asks questions during the live streaming of the oral arguments to the public.

The pandemic has also upended other traditions. If the justices were in their courtroom, Barrett would join her colleagues in a round of handshakes before taking the bench, a tradition every time the justices meet for argument or their private conference that was suspended months ago because of the pandemic. Spectators would see her emerge from behind the court’s red curtains and take a seat on the far right hand side of the bench, the junior-most justice’s seat. She would be seated next to Justice Neil Gorsuch, Trump’s first nominee to the court.

The Supreme Court will hear two criminal cases on Tuesday including one about sentencing young people to life without parole, before hearing cases on hot button issues on Wednesday and next week.

On Wednesday, the court will hear Sharonell Fulton v. City of Philadelphia, a case that would clarify the role of faith-based agencies in the foster care system. That case will explore whether the City of Philadelphia can exclude a charitable organization from a foster care program because of its religious-based objection to same-sex marriage.

Next week, the court will hear two cases on Monday on immigration and a challenge to police officers’ immunity to an excessive force claim. The justices on Tuesday will then hear a case challenging the Affordable Care Act, also known as Obamacare, which was a major focus during Barrett’s confirmation hearings before the Senate Judiciary Committee last month.

At the time, Senate Democrats claimed that Barrett would not hesitate to overturn former President Barrack Obama’s signature health care law if she joined the bench. Barrett repeatedly pushed back at that suggestion, saying that she had no animus or hostility toward the law.

The Supreme Court also released an order list on Monday from its Friday conference, but the court noted that “Justice Barrett took no part in the consideration or decision of the motions or petitions appearing on this order list.”

Barrett also did not participate in decisions the court issued last week that involved extending the deadlines for the receipt of ballots in the battleground states of Pennsylvania and North Carolina in the Nov. 3 election.

Barrett took her first oath—known as the Constitutional Oath—late Oct. 26 after she was confirmed by the Senate in a 52-48 vote. The first swearing-in ceremony was held at the White House and the oath was administered by Justice Clarence Thomas. President Donald Trump was also present.

Chief Justice John Roberts administered the second oath, known as the Judicial Oath, to Barrett in a private ceremony the next day in the Supreme Court’s East Conference Room, the court said. Following this oath, Barrett could begin participating in court decisions.

A formal investiture ceremony will take place at a later date, the court said in a statement last week.