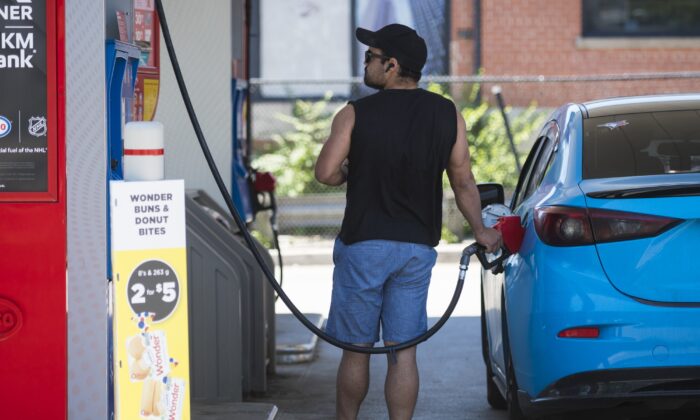 A commuter pumps gas into their vehicle at a Esso gas station in Toronto, Canada, on June 15, 2021. (The Canadian Press/Tijana Martin)
Canada

Just Over 1% of Canadians Say COVID-19 Is Top Issue of Concern: Survey

Respondents say inflation is their primary worry
By Andrew Chen

A recent survey shows just a handful of Canadians still find COVID-19 the top national issue of concern, while inflation rose to be the primary worry.

The Nanos survey, published June 3, finds that just 1.6 percent, or about 17 people out of the 1,070 respondents, believe that COVID-19 is the most important concern for the nation.

The number of people who found COVID-19 to be the most important national issue peaked around May 2020, with 50 percent of respondents saying so. The issue has continued to decline in importance in polls since, despite ongoing waves of resurgence as the pandemic developed.

“Worry about coronavirus continues to drop off the radar as Canadians increasingly focus on meat and potato issues,” Nik Nanos, founder and chief data scientist of Nanos Research, said in the news release.

In the June 3 survey, the issue of inflation was the top concern for 15 percent of respondents, followed by jobs and the economy with 13.3 percent, and healthcare with 11.6 percent.

Another recent survey, conducted by the Maru Public Opinion poll in late May, shows 78 percent of respondents have recession concerns, with 55 percent saying the country is already in a recession, and another 23 percent expecting an economic downturn to hit in the next three months.

The Maru survey also found roughly two-thirds (62 percent) of respondents believe the Canadian economy is on the wrong track.

Other issues of concern surveyed by the Nanos poll include 8.2 percent of respondents saying the environment is the most important issue, followed by concerns for free speech and freedom (5.4 percent), housing and housing costs (4.7 percent), debt and deficit (4.6 percent), fear of war (3.6 percent), and replacing Prime Minister Justin Trudeau (2.6 percent).

The survey is part of a series of Nanos Research’s tracking of issues of concern and public opinion generated by the COVID-19 pandemic. The first such survey was conducted on Jan. 24, 2020. The survey is based on a four-week rolling average with 250 respondents interviewed each week. It is accurate 3.1 percentage points, plus or minus, 19 times out of 20.

The Epoch Times reached out to Nanos Research for additional comment but didn’t hear back by publication time.