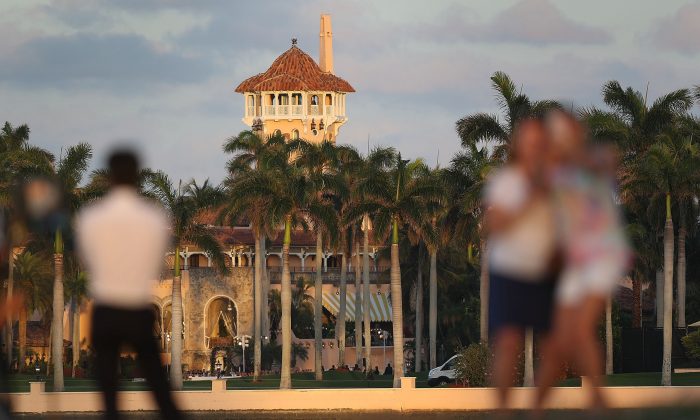 The Mar-a-Lago Resort is seen where President Donald Trump is hosting Japanese Prime Minister Shinzo Abe in West Palm Beach, Florida, on Feb. 11, 2017. The two are scheduled to get in a game of golf as well as discuss trade issues. (Joe Raedle/Getty Images)
Politics

The Utah Republican asked White House chief of staff Reince Priebus to describe the security protocols in place to protect sensitive information while the president is at the Palm Beach, Florida, resort that he owns and has visited two weekends in a row.

Chaffetz’s letter to Priebus, dated Tuesday, comes after news reports described a Saturday powwow between Trump and Japanese Prime Minister Shinzo Abe after North Korea launched a missile. The leaders were at a terrace restaurant that was in full view—and earshot—of Mar-a-Lago members.

The Oversight leader wants to be briefed on whether security protocols were followed that weekend, what documents were reviewed in common areas and whether any classified information was discussed.

Chaffetz is also asking Priebus for an “explanation about whether and how the guests, employees, and residents at Mar-a-Lago are vetted in order to ensure that they are not foreign agents or spies on behalf of a foreign government.”

Priebus is asked to provide the information to the Oversight Committee by Feb. 28.

This is Chaffetz’s second inquiry into the month-old Trump administration. Last week, he asked the Office of Government Ethics to look into whether White House counselor Kellyanne Conway violated ethics rules by touting Ivanka Trump’s fashion line during an interview.

Chaffetz has seemed reluctant to look into former national security adviser Michael Flynn’s December conversations with the Russian ambassador after the Obama administration imposed sanctions on the country.

Asked about whether lawmakers should probe the matter, Chaffetz told reporters Tuesday, “That situation is taking care of itself” and said he was glad Flynn had decided to resign. He also said such a probe would fall to the congressional intelligence committees.

Later, he told The Salt Lake Tribune he is “not ruling anything out” when it comes to the possibility of an Oversight probe.