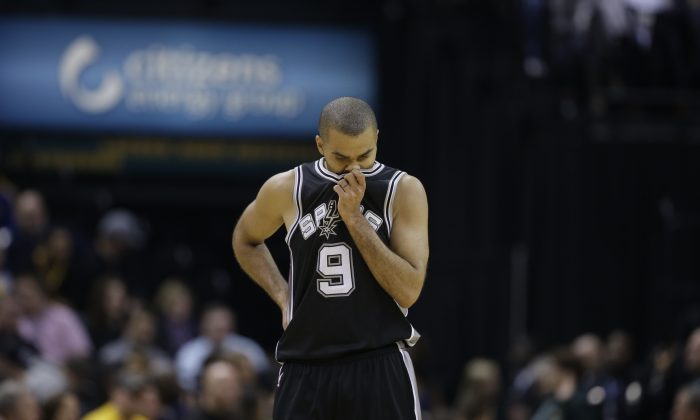 Just How Bad Has Tony Parker Been for the Spurs This Season?

San Antonio Spurs guard Tony Parker was a big reason the team won another NBA title last season, providing the foundation for what was considered the league’s best offense. His performance earned him a three-year, $43 million contract extension, and kept him firmly at the top of the depth chart despite two more-than-solid backups.

But as the Spurs struggle to stay afloat in the tough Western Conference, Parker’s subpar play this season is drawing more and more attention. In fact, by one measurement—Real Plus-Minus, which measures a players on-court performance in net point differential per 100 offensive and defensive possessions—Parker is one of the worst players in the league.

The 32-year-old, at a -5.58 RPM, is 488th out of 495 players who have played in the league this season. At the bottom with him are poor performers such as Anthony Bennett of the Timberwolves, Jason Smith of the Knicks, and Martell Webster of the Wizards.

Parker hasn’t been horrible this whole season. He started off strong, averaging 17.3 points and 5.7 assists while shooting 51 percent from the field. Just Parker doing his thing.

But Parker went down with injury in early December and missed a slew of games. And in the games he’s played since, he hasn’t been nearly the same.

In nine games in February so far—five of them losses—Parker is averaging 12.4 points and 5.4 assists in fewer less-minutes-per-game. He’s shooting much worse from the field, 41 percent. And he’s getting to the free throw line about half as often as before.

A lot of players are struggling on the Spurs, but Parker’s might be the most hurtful to the team. Patty Mills and Cory Joseph are solid players but don’t quite bring what a healthy and focused Parker do, and it shows. When Parker has played well this month, such as a 9–12 shooting night against the Heat, the Spurs win. But when he plays poorly, such as a 4-13 shooting night against the Raptors, the Spurs lose.

“I don’t even want to use that as an excuse. I don’t feel great. Everybody knows it. Coaches know it. But hey, that’s everybody. Everybody’s got nagging stuff. It’s been a tough year for me since I got back from the nagging injury. I have not been the same since my injury. But I’m not going to use that as an excuse. Everybody knows me better than that. I just have to find a solution, even if I’m not feeling great,” he told reporters on Wednesday night after a rough loss to Portland.

Parker said that if he could start making his mid-range jumper again, then that would be the key to improved play. But the real problem is Parker getting to the rim a lot less, and shooting worse than last season when he does get there.

NBA Playoffs: 5 Riveting Western Conference Matchups We Could See in First Round

Parker has never been a great outside shooter, and relies on his array of moves to sneak into the lane and shoot floaters, jumpers, or layups. Last season, he shot 349 shots around the rim and another 168 in the restricted area. He converted almost 60 percent of the former and 44 percent of the latter. In total, nearly 6 out of every 10 shots came in the paint.

If there’s one positive, it’s that he’s shooting much better from long range, but the Spurs would likely rather see Parker stick to his strengths and get inside more.

Two other potential positives come from advanced stats. Parker did really, really badly in the few games he played in December, posting a -20.3 net rating. But that rating climbed to -7.7 in January, and -5.1 in February, potentially indicating that Parker is getting into his comfort zone more and more.

The other positive is that Parker is playing pretty well at home, as are the Spurs as a whole. They’re 20–7 at home and 14–16 on the road. Parker just needs to find a way to perform better on the road, and he should be close to where he was at the beginning of the season.

Some, too, indicate that when other Spurs pick up their games, it will help Parker pick up his. “Can you point to anybody who is doing well?” Manu Ginobili said. “He’s struggling like the rest of us are struggling. It’s an ‘us’ thing. We as a team have to get it together.”