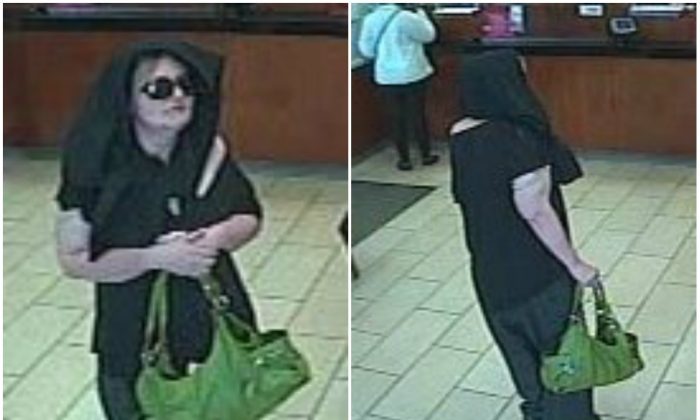 Just Bonnie, No Clyde: Women Are Robbing Banks More Than Ever

Shortly before noon of May 13, Josephine Sari, draped in black with black shades and a scarf over her head, walked into a Wells Fargo Bank in Willingboro, New Jersey.

She approached a teller and passed a note demanding money. The teller complied and Sari, 42, walked out with an unspecified amount.

That same day, Sari robbed a TD Bank less than 20 miles away in Hamilton Township, according to authorities, NJ.com reported.

The next morning, another TD Bank got robbed—less than 4 miles away—and police charged the same woman again.

As rare as this story may be, in one way it is becoming less so.

While bank robberies have significantly declined since the worst years of the 1990s, one statistic has consistently risen over the years—female suspects.

Between 1991 and 1993, women directly participated in only 3 percent of bank robberies, according to a 1997 FBI Law Enforcement Bulletin.

By 2003, women participated in more than 5 percent of bank robberies.

Last year, more than 7.5 percent of bank robbery suspects were women, based on 2015 FBI data for suspects whose gender was identified.

Women may increasingly see a bank heist as a safe option, since tellers usually hand over the cash upon a simple demand note.

“Bank employees are unarmed and consistently compliant. Even robbery transactions are handled quickly and efficiently,” reads a 2007 Problem-Oriented Policing guide on bank robberies distributed by the Justice Department.

“You don’t have to brandish a gun—you don’t have to even have a gun,” Darrell Steffensmeier, professor of sociology and criminology at Penn State University told SunSentinel. “You can just pass them the note. That’s huge.”

Yet unarmed note-issuing bank robbers have been the norm for decades.

It’s just that women seem to be taking advantage of the tactic at an increasing rate.

The FBI doesn’t break down the statistics for armed vs. unarmed bank robberies, so it’s not clear if women go for armed stickups more often now.

Anecdotally, they tend to opt for the gun-less option.

But, not always successfully.

On May 24, a woman walked into Chase Bank at Riverdale Avenue in the Bronx, New York. She demanded cash from the teller and received some.

Within minutes she tried the same tactic at two more banks, but the tellers refused and she left empty-handed, Pix11 reported.

That doesn’t mean, however, that teller resistance can solve the problem. More than one in five bank robbers brandished a gun last year.

“The bank’s primary objective is to protect the safety and security of its employees and customers by reducing the likelihood of violence,” the bank robberies guide states. “Most banks—consistent with police advice—direct employees to comply quickly with robbers’ demands.”

Meanwhile, a bank robbery continues to be an exceptionally bad idea, even from a criminal perspective—the payoff continues to decline, with just about $3,800 per heist in 2014.

The prime time for bank robberies is from 10 a.m. to 3 p.m. and Friday remains the day of choice for most bank robbers, according to the FBI.