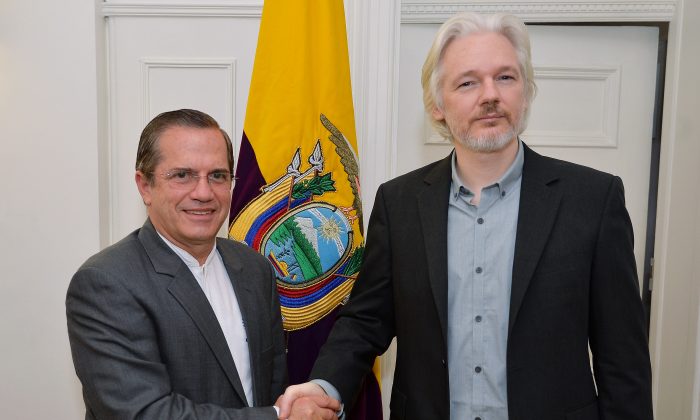 Ecuador's Foreign Minister Ricardo Patino, left, shakes hands with WikiLeaks founder Julian Assange after a press conference inside the Ecuadorian Embassy in London, Monday Aug. 18, 2014, where Assange confirmed he "will be leaving the embassy soon". The Australian Assange fled to the Ecuadorian Embassy in 2012 to escape extradition to Sweden, where he is wanted over allegations of sex crimes. (AP Photo / John Stillwell, POOL)
UK

Julian Assange, the founder of anti-secrecy website WikiLeaks, is still holed up in the Embassy of Ecuador in London.

In case you didn’t know, it’s been two and a half years–959 days or about 1,380,960 minutes–since he sought refuge at the embassy. He was facing extradition to Sweden over allegations of sexual assault.

Since then, it’s cost the U.K. government about $15 million to maintain a guard at the embassy, located in central London, reported LBC radio on Tuesday. On average, it costs more than $15,000 per day to guard the embassy.

Bernard Hogan-Howe, the chief of London’s Metropolitan Police, admitted the policing is “sucking resources” from the department.

“We’re gonna have to look to see what other opportunities we have, how we can do that differently in the future, because it’s sucking our resources in,” he told LBC radio. “I’ve already talked that we’re, that we’ve got less money. We won’t talk explicitly about our tactics, but we’re reviewing what options we have.”

Assange said he fears being sent to the U.S. from Sweden because of his work with WikiLeaks.

The 43-year-old said last year that he fears Met police are going after people who visit him.

He said, “The greatest concern for me is the intelligence gathering that the British police are doing on my visitors to the embassy, aggressively demanding their names and identity details.”

“Obviously, as an investigative journalist dealing with sensitive documents and with staff under threat, that creates difficulties for me and my ongoing position,” he added.

Police guard the outside of the Ecuador embassy so they can arrest Assange if he sets foot onto British soil. Ecuador granted him political asylum in August 2013.

Assange at a press conference in August 2014 year said he would leave “the embassy soon.” U.K. media reports have said he has been in poor health.

In November, the appeals court of Stockholm rejected a demand from Assange’s lawyers to lift an arrest warrant against him.

Sweden has not formally charged him, but prosecutors have said they want to question him over allegations of sexual misconduct brought about by two women. Assange has denied the charges, saying they are politically motivated.

Assange said that he would be willing to meet with Swedish prosecutors at the embassy office in London, but they have declined.

Meanwhile, the U.S. has never indicted Assange for his role at WikiLeaks, which released sensitive information about the U.S. to several media outlets including the Guardian and the New York Times.