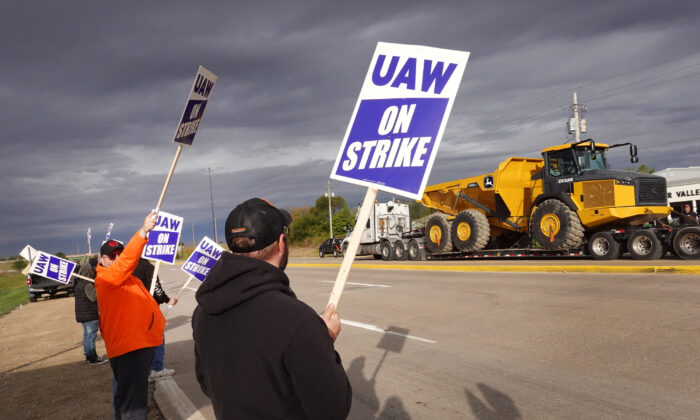 At truck hauls a piece of John Deere equipment from the factory past workers picketing outside of the John Deere Davenport Works facility in Davenport, Iowa, on Oct. 15, 2021. (Scott Olson/Getty Images)
Companies

Less than 20 percent of organizations rank employee retention and engagement as a top priority, despite a global labor shortage, according to a new report from NTT DATA.

The research (pdf) polled 1,000 business and IT executives across 16 industries in North America to uncover how organizations are prioritizing digital investments and strategies in the wake of constant disruptions stemming from everything from the global COVID-19 pandemic and social unrest, to workforce shortages and supply chain challenges.

It found that just 16 percent of organizations deemed employee engagement and retention as a focus area for the next two years, despite the global economy currently being in the midst of a “great resignation” in which millions of workers are leaving traditional workplaces and opting to work remotely.

Even fewer organizations, just 5 percent, reported employee demand as a driver for strategic or operational changes.

Those figures reveal more hiring difficulties may be on the horizon for U.S. firms amid a weak labor supply as many organizations are struggling to retain and attract skilled talent.

As a consequence, multiple companies across the United States are continuing to implement attractive bonuses and competitive compensation in an effort to pull in new workers after the pandemic.

The ADP Research Institute Workforce Vitality Report (WVR) released Oct. 27 showed that third-quarter wages in the United States increased 3.3 percent, in line with growth in the months before the COVID-19 pandemic, while job switchers’ pay is up 6.6 percent since September 2020.

Yet according to NTT’s report customer satisfaction and financial performance remain the primary focus over employee retention and engagement, despite employees themselves traditionally having a direct impact on business outcomes.

The lack of priority with regards to employee retention and engagement may in part have something to do with businesses turning to artificial intelligence (AI) to help drive results amid the labor shortage.

NTT’s report notes that one-third of organizations it polled are beginning to use AI-driven conversational interfaces and virtual agents for customer-facing processes, with 80 percent saying they have seen an uptick in customer satisfaction.

“AI-based tools are also driving customer engagement and internal efficiency, and the largest benefits appear in dollars and cents; well over half of respondents have implemented AI in at least some areas, with two-thirds citing financial performance gains from their use of this technology,” the report states.

“Organizations are relying on these technologies to survive uncertain times by reducing operational risks and leveraging digital tools to achieve a wide array of benefits that help meet overarching business goals,” the report adds.

In September, the United Nations human rights chief Michelle Bachelet warned that AI systems may pose a “negative, even catastrophic” threat to human rights and called for AI applications that are not used in compliance with human rights to be banned.

Her remarks came shortly after her office published a report that analyzes how AI affects people’s right to privacy, as well as a string of other rights regarding health, education, freedom of movement, and freedom of expression, among others.