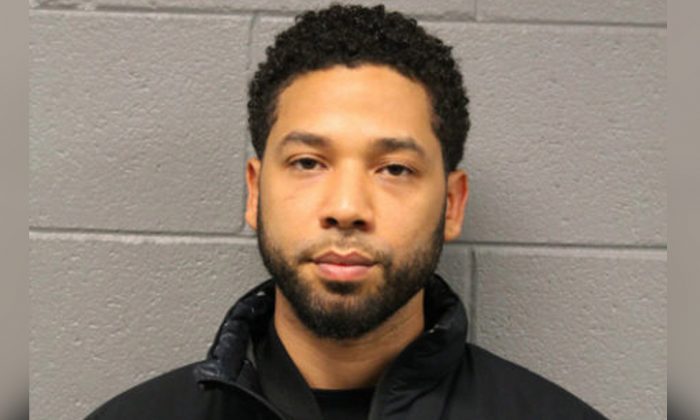 Jussie Smollett in a Feb. 21, 2019, mugshot. (Chicago Police Department via AP)
US News

Actor Jussie Smollett told the Osundairo brothers he paid to fake a hate crime attack against him to yell “This is MAGA country,” according to Chicago prosecutors.

Smollett, 36, was arrested on Feb. 21 for a charge of filing a false police report.

The “Empire” actor initially claimed that two white men on Jan. 29 assaulted him in downtown Chicago in freezing temperatures, shouting slurs in addition to the “MAGA” line, in an apparent reference to President Donald Trump’s “Make America Great Again slogan.”

While “MAGA” is known as shorthand for the slogan, it’s rarely said aloud in place of the full slogan, making the quote appear awkward. With Chicago being heavily liberal along with most other American cities, it was one of the aspects of the alleged attack that first ignited people’s doubts.

After Smollett appeared in court and had his bond set at $100,000, prosecutors released a four-page summary of his alleged actions. According to the summary, it was Smollett’s idea for Ola Osundairo, one of the Nigerian-American brothers, to yell “This is MAGA country” while placing a rope around his neck.

Smollett also instructed the brothers to yell slurs at him and that Abel Osundairo, the other brother, should “attack him, but not hurt him too badly.”

Smollett gave the brothers extra money to buy the rope, ski masks, gasoline, gloves, and red baseball caps. The latter resembled the red hats that say “Make America Great Again,” which are worn by Trump and supporters of the president.

Smollett is also believed to be behind a letter that was sent to the actor at the “Empire” studios in Chicago and contained the word “MAGA” in addition to threats. The FBI and U.S. Postal Service are investigating whether the actor was involved with sending the letter, which contained a white powdery substance that was later determined to be aspirin.

Police said that Smollett was motivated to stage the attack because he wanted a higher salary.

Smollett, like many in Hollywood and the entertainment industry, has been a big critic of Trump, recently calling Trump “and all his white cohorts” a “national disgrace.”

“And if you support them … so are you,” he wrote. “Clowns.” He shared a video that showed far-left lawmaker Rep. Alexandria Ocasio-Cortez (D-N.Y.) speaking.

In an interview that aired on ABC a day before the Osundairos were arrested, Smollett said he thought he was attacked because of his frequent criticism of Trump.

The allegation from Smollett that his alleged attackers shouted “This is MAGA country” sparked a slew of comments and articles from media outlets claiming the attack was the latest from Trump supporters and trying to tie it into allegations of racism by the president and his supporters.

In one of the most notorious cases, GQ magazine claimed: “The racist, homophobic attack on Jussie Smollett is far-right America’s endgame.” Inside, the writer, Joshua Rivera, said about the “MAGA” quote: “While its veracity isn’t confirmed, its sentiment needs no fact-check.”

“America’s choice to embrace the blind rage of late-stage whiteness in decline is an explicit longing for this kind of crime, a version of America in which those who do not assimilate to the satisfaction of their white, straight, and Christian betters are subject to the impunity of law enforcement, the scorn of the media, and the fury of racist homophobes stalking the streets of your city, who want you to know that they could lynch you if they really wanted to, and maybe get away with it too,” he added.

The article remains online and Rivera has not apologized to Trump supporters.

The writer said it didn’t matter that Smollett allegedly made up what happened. “Read the piece again. it doesn’t accuse anyone of anything but talks about the climate we’ve created, and why that made this alleged attack a flashpoint,” he said.

After the attack was revealed by officials to allegedly be a hoax, Trump took to Twitter to slam Smollett for including the quote in allegedly staging the attack.

He wrote, “Jussie Smollett—what about MAGA and the tens of millions of people you insulted with your racist and dangerous comments!?”