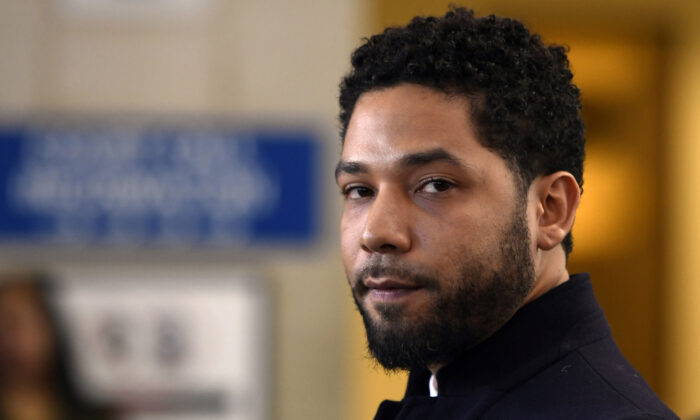 Actor Jussie Smollett talks to the media before leaving Cook County Court after his charges were dropped, in Chicago on March 26, 2019. (Paul Beaty/AP Photo)
US News

Jussie Smollett has been moved to a new jail cell, the Cook County Sheriff’s Office and his family said Tuesday.

The former “Empire” actor, 39, was sentenced to 150 days in jail on March 10 for lying to police about being a victim of an attack he was accused to have orchestrated himself.

Smollett’s brother, Jocqui, said the former TV star had been housed in the prison’s psych ward and that officials had noted that he “was at risk of harming himself” which he said was “very concerning” because his brother was “in no way, shape or form at risk of self-harm.”

At the hearing, Smollett repeatedly declared he is “not suicidal.”

Jocqui took to social media on Monday where he explained that his brother had now been moved to a new jail cell, out of the psych ward with a restrained bed into a normal one, and thanked fans for their support.

“So I just got to see him,” Jocqui said. “Before he was sleeping on a restrained bed and now he’s been moved to a jail cell that actually has a bed. Thank you so much. That’s really because of all the #FreeJussie that’s been going on. It’s all the pressure we’re applying on Cook County and Cook County Jail.”

Jocqui also claimed that Cook County “doesn’t really move until they get bad publicity” and encouraged fans to “keep applying pressure,” and to call Cook County Jail to check in on the actor while “saying that you believe he should be free.”

A representative for the Cook County Sheriff’s Office also confirmed in a statement to The Epoch Times that Smollett has been moved to a new jail cell, noting that this was done because his cell was needed by another person who had been detained.

“Mr. Smollett’s housing unit was changed Monday to a different cell within Division 8. He was moved from that cell because Cermak Health Services needed his cell for another detained person,” the representative said.

The Sheriff’s Office said the decision was made by the medical professionals, noting that Smollett “was never restrained to a bed or anything else in the cell” and this his bed “was never equipped with restraints.”

“Mr. Smollett remains housed in his own cell with officers stationed at the open door to his cell to ensure that he is under direct observation at all times. As with all detained persons, Mr. Smollett is entitled to have substantial time out of his cell in the common areas on the tier where he is housed,” they added.

The Epoch Times has contacted Cook County Sheriff’s Office and a Smollett spokesperson for comment.

Cook County Judge James Linn earlier this month sentenced Smollett to 30 months of felony probation, including 150 days in the county jail, for lying to police about being the victim of an attack by two masked men that he said took place in January 2019.

A jury in December 2021 found Smollett guilty of five of the six felony disorderly conduct counts he faced, one for each time he was accused of lying to police.

Smollett was also ordered to pay restitution of $120,106 to the city of Chicago, and a $25,000 fine. The judge denied a request to suspend the sentence, and ordered that Smollett be immediately placed in custody.

Smollett and his family have maintained that he is innocent.

He also turned to the court, and said, “I am not suicidal. And if anything happens to me when I go in there, I did not do it to myself. And you must all know that.”

Meanwhile, Smollett’s lawyers are demanding an emergency suspension of the actor’s five-month jail sentence, citing “vicious threats” they have received which they say raises concerns about his safety in prison.

A spokesperson for the actor told Rolling Stone that one of his siblings received a threatening call on Friday morning from an unknown male.

“I hope what they do to that guy in jail—here’s what they’re going to do, right. They’re going to take a broom handle, and take that little [expletive], shove it in there, and he’s gonna go, ‘[shrieking sound],” the message allegedly said, according to Rolling Stone.

The actor’s lawyers added claim he had become the target of “vicious threats” online which they believe “no doubt reflects the hatred and wish for physical harm toward Smollett which he may experience during incarceration.”

Lawyers further claim Smollett has a “compromised immune system,” which could be a “serious health risk” if he were to be exposed to COVID-19 while in custody.